No excuses: 2019 must be the year of gender equality in techPosted almost 4 years ago by Michael Oliver 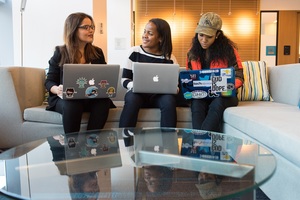 The UK tech industry is booming. It is the third-largest in the world, worth an impressive £186 billion and is growing at more than twice the rate of the economy as a whole. Tech candidates have a surfeit of jobs open to them across a bevy of industries and organisations.

But that only 17% of individuals in the industry are female is one of tech’s enduring shames.

The sector’s embarrassing gender gap has been a subject of much thought. But a recent report by leading tech job board CWJobs shows why this is crucial for the industry’s future.

In fact, there is more than an appetite for change – there’s a furious hunger.

The report was the result of an online survey of 300 key decision makers and senior IT professionals across the UK’s IT and tech sectors. It found:

Tech sector companies must see this as a call to arms – more than a PR exercise, but an earnest drive to become better companies. The best thing is that a blueprint exists – and it’s not too hard to find examples.

The accounting firm established the Her Future programme in 2016 to boost the number of women taking on technology roles.

A part of its focus has been to build graduate recruitment by expanding its candidate talent pool. They made it a priority to search beyond universities and take on more grads from non-IT and non-Steam backgrounds.

The results speak for themselves :

“KPMG says that the proportion of female graduates going on to take up technology roles at the firm, after the programme, has already increased from 36% in 2015 to 54% [in 2018].”

The Tech Talent Charter (TTC) was founded by organisations across tech, recruitment, and social enterprise sectors.

Signatories pledge to adopt an inclusive recruitment process, where “women are included on the shortlist for interviews and diverse talent is actively encouraged to apply for roles”. The process must be overseen by a senior-level representative and include robust policies for attracting, training and keeping diverse talent.

The TTC is also backed by data, with signatories submitting “employment diversity data into a common central anonymised database”.

Beyond its charter, TTC also runs events and supports the Everywoman In Tech Awards.

You can discover more about the TTC here.

Women in Tech is an all-purpose hub of advice, case studies and guides for women working in the tech sector.

One of the most impressive features is Women in Tech’s guide to hiring more women. This includes a list of steps employers should think about when hiring women.

Its exhaustive resources are buttressed by an enviable list of events, webinars and conferences .

It’s no longer good enough for organisations to hide behind aspirations and fluff. A more diverse tech sector will be more productive and more likely to grow – and organisations of all sizes must seize that opportunity. The resources are there – all they need to do is use them.