Nick Boulton: Why I’m bullish about the UK tech market outside LondonPosted almost 3 years ago by Nick Boulton 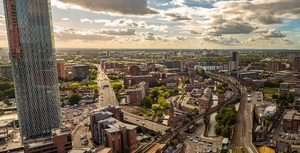 There is no doubt London is one of the leading technology hubs in the world. In the last 12 months, the capital attracted 91 tech investment projects bringing in a whopping £864m.

Despite London’s lure, the rise of tech firms outside the M25 has also been enormous. A RMS report last year found the South East of England was home to 1,296 start ups in 2017, and the North West attracted 707 new firms.

I’m not surprised. The regional tech scene is a sleeping giant that’s starting to stir. In spite of any Brexit headwinds, it’s something I’m bullish about.

Birmingham, Manchester, Reading and Bristol – and the university cities of Cambridge and Oxford – are brimming with tech firms with plans to grow. Plus, the South Coast is becoming a leading centre of excellence for the financial and business services sector, which the government has invested heavily in.

Research by Tech Nation found that 1.7 million tech jobs were advertised in 2019, with Manchester having the most job openings outside of London. That screams opportunity.

But therein lies the rub: the jobs are there in the regions, but where is the talent?

At Client Server, we’re keeping our ears close to the ground. The main issues we’re seeing are:

But this is where Client Server comes into its own. Our hugely-impressive team in Esher, responsible for working with our clients outside of the M25, have excelled in the last three years.

The team works anywhere between 50-70 high-level tech roles a week . Plus, their client pool has been earmarked for further growth and investment.

Their ability to source, secure and support local talent for all our clients’ needs, has been exceptional and shows no sign of slowing.

When I see these things come together, I can’t help but be excited. The tech market outside London is strong and only getting stronger. That’s good news for the industry and it’s great news for us at Client Server.