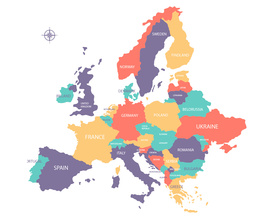 In this current climate, it feels like most people’s glasses are half empty. But 2019 has been a great year for Client Server, I want to focus on a few things I’m looking forward to.

Near the top of the list is the arrival of our European desk, which I think will be massive over the next 12-24 months. We’re bucking the ‘open-an-office-in-a-European-tech-hub’ trend by running things from London. Yes, even amid the doom and gloom around Brexit, we’re going to recruit European-based roles from the UK.

We have the flexibility to fly from City Airport to any of our clients and the increased norm of doing business over video means the need to have a presence on the ground has diminished.

I’m not naïve enough to say there won’t be issues if/when we leave the European Union, but does anyone actually know how this will look? European cities are developing innovative and sophisticated tech hubs that need a reliable stream of talent. The world will continue to function and to stay at the bleeding edge of technology and business, they will need the best talent. The shear incompetence and lack of leadership from our politicians beggars belief, but the tech world doesn’t stand still and neither will we.

I’m buoyed by the possibilities in the UK tech market, particularly outside London. Our UK-wide team based in Esher has gone from strength to strength in the last 18 months. I think local and national government should embrace this trend and continue to invest in local infrastructure, which will help these micro economies flourish as the trend to move out the city and live a better, balanced life becomes more popular.

The big question I have is whether the regional market will prove more lucrative for Client Server than our London market. There’s a very real possibility of that happening.

Celebrating 20 years in business is quite an achievement. Having joined Client Server in 2005, I have been part of its journey from an early stage.

Working in our first tiny office in Surbiton above an estate agents were interesting days, but let us not forget that Client Server was founded in October 1999 by my business partner David Kerr in his back bedroom. Through recessions and restructures, the mind boggles thinking about our growth.

I’m extremely proud to be part of what I think is one of the best technology recruitment consultancies out there, with ambitious growth plans, innovate ideas and a genuine passion for service, I’m incredibly excited about the challenging events to come.