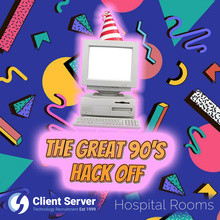 Building a website in 1999 was no small feat. E-commerce was in its infancy and the halcyon days of dial up modems meant ‘surfing the web’ was an entirely different experience from today. For those who never enjoyed the sheer pleasure of waiting a full minute for a page to load, www.oldweb.today will melt your brain.

In 1999, we were at least five years away from the nadir of Web 2.0 and the social media revolution. But bringing social media to the 90s is exactly what teams in The Great 90s Hackoff will set out to achieve.

But building a 90s Facebook is about more than jagged jpegs and simple hex colours. Teams will need to recreate the experience of using a social network. That will require using some special code.

What language versions will teams in The Great 90s Hackoff be allowed to use?

Javascript is arguably the most important building blocks for 90s websites (and indeed most websites since). It was invented by Brendan Eich in 1995, inspired by Java, Scheme and Self.

( This post from Ben Aston on Medium outlines the slightly odd history of the language.)

For The Great 90s Hackoff, teams will be asked to use the third edition of the ECMAScript Language specification. This version, released in December 1999, introduced regular expressions, better string handling, new control statements, and formatting for numeric output.

C++ evolved relatively slowly throughout the 2000s, with C++98 the standard bearer until the C++11 standard was released in 2011. Many programmers will balk at the thought of going back to C++98, having worked with the 12 years’ worth of improvements in C++11, but it’s by no means impossible to use.

Released in December 1998, this version of Java was considered a significant release of the language, tripling the size of the platform to 1520 classes in 59 packages. The release introduced the strictfp keyword, the Swing graphical API integrated into core classes, a Java plugin and collections framework.

CSS 2 included capabilities like absolute relative, fixed positioning of elements and z-index. Perhaps the most interesting facet is included support for aural style sheets, which were later replaced by CSS 3 speech modules.

Initially code-named "Cougar" HTML 4.0 adopted many browser-specific element types and attributes, but at the same time sought to phase out Netscape's visual markup features by marking them as deprecated in favour of style sheets. It included three variations: Strict, Transitional, and Frameset.

Launched in June 1998, PHP 3 saw a rewritten parser coupled by a later rewrite of its core, producing the Zend Engine in 1999. PHP 4, powered by Zend Engine 1.0 fell just short of being eligible for The Great 90s Hackoff, being released in early 2000.

Sound daunting or as easy as the first lesson on Code Academy? Put your money where your code is and enter The Great 90s Hackoff. Funds raised from the hackathon will support Hospital Rooms. Start your entry here!