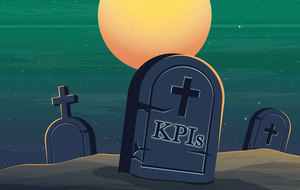 It’s probably the best known sales acronym, yet every salesperson shudders at the mere thought of them.

Like seemingly every business practice, KPIs are under attack. Some say they’re an archaic cudgel used to beat salespeople into shape. Others say they just need a little bit of love. And then there are the heathens who think they should be scrapped altogether. Madness, I say!

Evolution is better than revolution. The sales game is beset on all sides by ‘disrupters’ and ‘movers’ trying to make things easier by plucking out those pesky targets and tossing them into waste-of-time basket. That’s loser talk. The KPI shouldn’t be feared, it’s the most useful tool in a salesperson’s toolkit. Why? Two words: self-monitoring.

Sales is simply a numbers game. You are dreaming if you think you can hit targets without a monitoring device. The skills, finesse and personality salespeople deploy are tools used to achieve those targets. And while the numbers may be set in stone, those other attributes are more adjustable. You can dial down or dial up your personality depending on whom you’re pitching to. But it starts with knowing where you sit on the KPI ladder.

Let me use a non-sales example. Imagine telling an elite sportsperson that once they’ve made the big time, they can stop practising. You’d be laughed off the pitch. This is when it’s even more important to practise, to look at the detail, to look at the numbers !

But should KPIs evolve? Yes they should… to a degree .

Now, here’s where you can be clever with what’s measured. At Client Server, I focus my teams on:

I call these money-making KPIs. Leads generation gets you to the door; these ones will get you inside.

Don’t think “Death to KPI’s!” think “How can I use them differently?”

Be consistent with their use, too. Far too often I see great ideas and targets set only for them to be forgotten the following week, month or quarter. A good KPI doesn’t move – and it’s not going extinct anytime soon either.