The Story: Arek Adeoye, in his own wordsPosted over 2 years ago by Michael Oliver 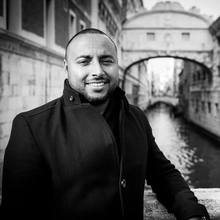 Arek Adeoye is a senior tech lead at RPC, but he’s had a major hand in creating some of the most interesting and innovative tech projects. He shares his story with Client Server’s Michael Oliver .

My name is Arek Adeoye. Most people can’t pronounce the surname correctly as it’s of Nigerian origin. I’m a software engineer by background and have been doing this for almost 20 years.

I grew up in Nigeria where technology is slightly different than from here in Europe. My dad is an engineer – his mission in life was to produce agricultural machinery that would help locals better their lives. I spent a lot of time working with him. I learned to weld, turn lathe machines, all kinds of physical work. I really enjoyed the idea of building something from scratch, taking bits and pieces and putting them together.

When I was 16, I moved to Poland. You couldn’t get a more contrasting place. I didn’t have the kind of opportunities I had when I was working in Nigeria and I knew I had to decide what I was going to do with my life.

Shortly after, I had my first contact with a computer. It had a green screen and you could type letters on it. You were lucky if the keyboard worked. But I remember how fascinated I was by it, the idea that you could type things and they would just appear like magic.

My grandad got me my first computer when I was 18. It ran Windows 95 and had a graphical interface, it was exciting to get my hands on. A classmate asked if I had ever heard of an “email”. With my mum and dad back in Nigeria, this “email” sounded like a lifesaver. For the first time, I could send something to my parents and they would receive it instantly. I had written letters and they would take a couple of weeks to arrive, but email made all the difference. That’s what sparked the interest.

When I was a little older, I got in touch with a friend who was living in London. I asked him, “What are the prospects of me coming to the UK and learning how to do stuff with computers?” I didn’t have a goal in mind – like being a developer – I just wanted to do anything that would get me using computers.

He invited me over and introduced me to a couple of friends who ran a software house. They were one of the first teams to build websites. They asked me, “What can you do?” I was enthused by the opportunity to do anything. “Okay, you have a week to build anything with web,” they said. “You don’t need any software, just use Notepad and build something. Come back to us afterwards and we’ll see what you can to do.”

I went off and built my first ever HTML page. I put things in tables, added some flash balls jumping around the page – this was all pre-Google too, mind you. I took that back and showed it to them. I don’t know what they saw in it, but they were happy enough to give me a try.

I got a five-year work permit and joined their team. They trained me up, gave me access to courses, and put me through some schooling. I did a Visual Basics Six course, C++, and then a SQL server course in a single year. I was happy to learn it all. I’ve noticed that I tend to pick technical things up fairly quickly. I always tell myself there’s no challenge that the computer will give me that I won’t be able to solve.

I started with HTML. JavaScript was fun, SQL databases too. I learned how to put pieces of computers together with different kit. Soon, I was building servers for the company. I learned by doing. I would open a computer, look around and try to figure out how it worked. “That looks like a graphics card.” “That looks like a network port.” I learned that it’s actually quite hard to mess that up. If it doesn’t fit in a slot, it’s not meant to be there. But programming languages? They never really troubled me.

I love coding. I love looking at it, writing it, seeing what it does on screen. That’s why I found front end so rewarding – you got to see the fruits of your labour. It reminded me of working with my dad.

Some of my favourite projects were from the early days. I worked with Intelligent Finance at one point, where we wrote a predictor that could predict how well a certain advert will do on a certain day in a certain part of a newspaper. We were pretty close to getting it right, but we never launched it because we lacked the computing power to do those kind of figures.

We also wrote one of the first email software tools – before MailChimp and the like. You could say we were pioneer spammers before spamming was even a thing. It was the first taste of online marketing.

Fast forward in time, and I’m still trying to learn as many languages as possible. I’ve picked up things with Angular very quickly, as well as node and it’s V8 engine. I’ve also started looking at Python too – I love looking at the pros and cons of every language. That came to a head when I took a course at Stamford about artificial intelligence (AI). I got a little annoyed with it when I realised it wasn’t actually ‘artificial intelligence,’ it’s really just mathematical algorithms that are able to predict based on past data. I believe strongly that there’s use for that, because it’s awesome at finding patterns and finding things you wouldn’t be able to see by simply looking at data.

But there’s one example that sticks out for me. Let’s say there’s an earthquake in a certain part of the world over a number of years. All that data is available, but you can never predict when the next earthquake will be. AI will never be able to do that. If you’re looking for AI to predict natural disasters, it will never happen.