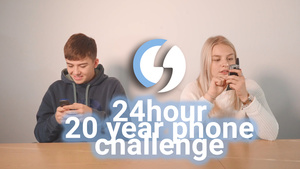 Twenty-years ago, the world of mobile phones was markedly different. The biggest selling mobile phone in 1999 was the Nokia 3210, which looked like this:

It was the first mobile phone to be actively marketed to young people. The inclusion of 3 games, changeable "Xpress-on" covers (as on the previous Nokia 5110), an internal antenna, customisable ringtones and competitive prices led to the handset's huge popularity with those aged 15–25.

But how would teenagers in 2020 find the most popular phone from 1999?

To celebrate 20 years in business, we're conducting a little experiment. We asked two teenagers, Max and Mia, to give up their smartphones for 24 hours in favour of mobile phones from 1999.

How did they cope? Did they go through Snapchat withdrawl?

Check out how the two teens made it through 24 gruelling hours.