Bullshit, Bollocks and Balderdash: What to do when your candidate liesPosted almost 3 years ago by Nick Boulton 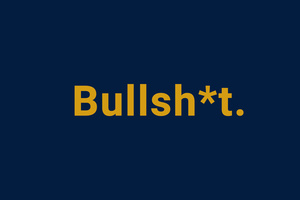 If you work with people, you’re going to get lied to – that’s the cold, hard, truth.

And in recruitment, it’s going to happen a lot.

Tech is a candidate-led market. Top developers have a surfeit of choice of where to take their job hunt. It’s expected the best will interview for two, sometimes three different jobs at a single time.

Having heard every excuse under the sun from candidates, I’ve made peace with the fact that you’re going to hear a few little white lies.

But there are ways a recruiter can manage these – and, in a lot of cases, nip the fibs in the bud before they flourish.

I’m old school (or in my children’s eyes, just old!) I’ve got two ears and one mouth and use them in that ratio. So, when interviewing a candidate for the first time, I listen!

Not only will this prevent most surprises, it gives you the best steer for closing your candidate. If you listen to what the candidate wants and you pitch a job that fits, then you stand a strong chance of placing them.

The road to a lie will be signposted

If a candidate throws you a “My hamster Joey just died, I can’t interview!” type of line, it really shouldn’t come as a surprise.

If you’re honest with yourself and you look back at when this has happened, they tend to be people you had your suspicions about in the first place. They are the ones who are late, hard to get hold of, evasive, don’t come back straight away with interview availability or feedback etc.

It doesn’t matter how good you think they are, if you don’t have clear communication channels where both of you are informed from the start, it’s not working! This happens from your very first call/meeting. Any recruiter worth their salt knows when the candidate has bought in, and so do candidates with their recruiters!

If your candidate calls up on the morning of an interview and says: “I’m not going because I got offered a different job,” don’t stand there dumb-founded, mouth aghast, feeling betrayed, thinking “How could they do this to me?” Because, to be blunt, it's probably your fault.

When do you think they got offered this job? During the night? By the magic recruitment fairy in your sleep? Or by carrier pigeon on the way to your interview? NO!

Either they are lying, which means you had not built the relationship you should have at the start of the process, a better recruiter has just done one over on you (shame!) and actually found them a job that suits them?!

If you had really done a good job, you would have:

If you haven’t covered all bases, you probably haven’t managed your candidate properly.

Recruiters and the recruitment market in general can have a bad name, but don’t be afraid to deliver bad news. Honesty is incredibly important.

What we try strive for is being consultative. This might mean telling a candidate they are not right for a role, informing a client that the candidate has taken a better job opportunity, but ultimately they will respect you more for this and you will have more success in the long run.

You win some, you lose some but what doesn’t kill you makes you stronger – or something like that.