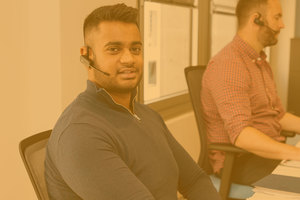 After working a dead-end job in telesales for six years, Krishan Seenundun went looking for his next challenge. He found that, and more, at Client Server.

What were you doing before you joined Client Server?

Like many graduates, I got a retail job in telesales as a short term fix. Six years later, I was still there, and at a complete dead end. I knew sales was ‘my thing’ but I needed a new challenge.  I originally applied for a sales role at Client Server which I didn’t get, but I was told that I had a recruiter’s skillset. I didn’t think I had what was needed and then it hit me— recruitment is selling, it’s selling people jobs.

What were your first few months at Client Server like?

I had never worked in an office environment before, let alone knew the first thing about recruitment, which made the first six months tough - the toughest of my working life. My first month was shocking, to say the least, and the months following weren’t any better. Words like “KPIs”, “pipelines” and “lifecycles” weren’t a part of my everyday lingo, so I had a steep learning curve. I thought I was tech-savvy, but developer technology is a totally different ball game. I was committed to learning, developing and not giving up, which was recognised by my managers. I began to set myself monthly targets that motivated me to work harder and more efficiently (it helps when one of our directors runs a training session on working efficiently). Finally, six hard months later, I made my first deal.

How are you finding it now 18 months down the line?

I’m still standing! I’ve had to re-evaluate my process and my strategy by setting myself targets and goals. There was a time I wanted to go on holiday but Ito hit my target before I went and I did – drops mic! I also believe that the rewards and recognition have kept me going. I came runner-up for Client Server’s ‘Rookie of the Year’ prize, which I was disappointed as I wanted that number one spot. But I put my head down and got more than my quarterly target, winning ‘Employee of the Month’ which I was very proud of. I’ve noticed that my communication skills have improved allowing me to think on the spot and adjust myself to be able to talk to people from different nationalities and identities. I hope that I can continue to progress, especially coming from a management background it would be good to get back into management and lead my own team.

What have you enjoyed most about working at Client Server?

I’ve enjoyed working in my team and seeing how the company collaborates with each, people don’t stab you in the back. There’s a clear structure to the company so everyone has their niches so you know exactly who to go to.

Don’t give up, I’ve said this to a couple of people who come from non-recruitment backgrounds. Follow the process that CS tells you and if you follow you will achieve. CS makes it clear that it’s more about the effort than the billings, if you’ve done everything they’ve asked you then they will give you the training that you need and require.