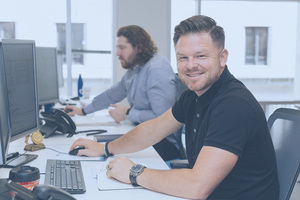 Historically, people have branded recruitment as a way to earn quick cash en route to your career. But for me, this is my career, and I can’t see myself doing it anywhere else.

I come from a very diverse background where I started off as a musician playing in West End shows, to joining the RAF, meeting my wife in Cyprus and then falling into recruitment. 11 years later and I’m still here, there really is no blueprint to becoming a recruiter!

After handing in my resignation at the RAF after 4 years of service and having to serve a further 12 months’ notice, I had plenty of time to think about my next steps. I wanted a job that wasn’t going to limit the speed of trajectory of my career. I realised that progression in sales and recruitment was largely down to your own ability rather than having to be in the right place at the right time, which I had found all too often when I was a fulltime musician. I was living in Surrey at the time and applied for a position at Client Server’s original office in Esher, interviewed and was offered a job the next day.

I bought into the way that Client Server do things from the start, I was told that I could architect my own success from the very beginning and committed to setting myself a clear path. I was asked to become a mentor fairly early on, but quickly realised that I was too much of a control freak to let other people’s destinies determine my own. I initially went down the delivery and account management route but two years ago, the time was right, and I saw the opportunity to grow in the business and decided to become a team lead. A decision that I have never looked back on.

In recruitment I’ve found that there is a very clear distinction between success and failure, so you have that element of instant gratification when you do succeed, it’s not like music where everything is subjective, and down to individual perception. However, recruitment is tough, you’re not always successful and I certainly haven’t always excelled, but there are always people at Client Server who are there to share ideas and get opinions from to help you.

My job now is to coach people into becoming a successful consultants, it’s no longer an individual thing, or just a team, it’s more like a family where everyone supports each other and my main focus is the success of my colleagues and the wider business. I want them to deliver revenue, I want to support them in reaching their own separate aspirations and I want them to approach things in their own way so that collectively we can contribute to the growth of the business and continue our reputation as the leading technology recruitment company in London.

Client Server is the only recruitment company I’ve worked in and we are as fluid as we can be to benefit our clients and candidates needs which is why, as a business, we have been able to grow year-on-year and expand accordingly into new areas, which is rare. I’ve seen a lot of recruitment companies in my time and I wouldn’t change Client Server’s model for the world. Recruitment is my career and I’m in it for the long-haul.