Mental Health Awareness Week: Don't be afraid to ask for a day offPosted over 2 years ago by Client Server 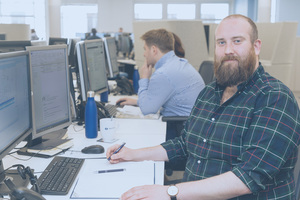 I don't know why I did it. I was feeling all right. I don't know why I forgot that this was my life, but there was just something that lapsed a little bit. I had a cup of coffee in my hand, I opened the front door, and suddenly realised “I don't have a commute anymore”. It just hit me like a ton of bricks…

Back in February, I went skiing on a lovely holiday with my girlfriend, best holiday I've ever had. Then three weeks before lockdown, my landlord tells me he’s selling our flat. A week after that, my girlfriend broke up with me. None of this was part of the plan. It meant we had three more weeks of living together in the flat, after which I would be facing nigh on homelessness.

Thankfully, I reached out to one of my best mates from school, and he and his girlfriend let me stay with them. They have a very nice rooftop terrace flat in a new build in Dalston, a very trendy area in London. So, it looks like everything’s coming up Robbie – I fell in shit and came out smelling of roses.

It’s all very positive, all very fine. And then the lockdown intensifies. My friend and his girlfriend decided to isolate with her parents in Scotland before I moved in at the end of March. I had gone from living with my girlfriend of three years to being in complete isolation. It was a very, very dramatic shift.

Oh god, I’m just a 27-year-old bloke living by myself in a flat I don’t know in an area I don’t know.

By this stage, Client Server was about three weeks into working from home. In the ‘Beforetimes’ I had a 45 minute train ride into our office in the City of London. This was ‘my’ time. I could watch what I wanted, read what I wanted, get ready for the work day and mentally prepare. Of course, it’s the exact same on the way home. I could decompress, I could just completely resolve anything that was bothering me, because I had 45 minutes of me, by myself, on a train, don't have to talk to anyone or do anything. The commute time is productive because it allows your brain to be fallow and switch off for the day.

And then it was zero. Zero time to prepare. Zero time to decompress. Working from home meant rolling out of bed and commuting 1.5 metres to the computer, which is constantly there. There was no separation. It was so easy to be on my phone, checking work emails. After three weeks of doing this day in, day out, it become very, very, very monotonous. I was working where I sleep, sleeping where I work. Zero escape.

I had lived by myself for three years at the pub where I also worked, but it's so completely different. Everyone that I knew – my mates and all the friends I had through working there – congregated downstairs. The pub felt like a big living room, and I had the ability to go up and down and shut myself off when I wanted or be fully, fully immersed in the social atmosphere. It was the best of both worlds.

But now, I was very secluded from the world. There’s only so much of that a person can take.

The weeks dragged. Monotony kicked in. The silence was deafening – and it all came to a head.

I sat down at the computer on Tuesday and couldn't do it, could not do it. It was a feeling of being overwhelmed. This is me forever. How long’s this going to go on for?

One of my biggest strengths is being self-aware and catching things early enough. I knew that I wasn't going to do any work.

And then I did the best thing I’ve done during the entire eight week isolation. I called my Team Lead and just told him: "I'm really not up for today. I can't do it. You're not going to get an honest day's work out of me. There's no point in me even sitting here, staring at my computer. I want today and tomorrow off. I need to get away from work. I’m just exhausted, emotionally, mentally exhausted."

One of the things I really like about Client Server is they’re really good with this kind of stuff. – They are open and empathetic, even though it was a big deal for me to speak up and ask, they didn’t hesitate to support me.

I switched off my computer, logged out of emails, and spent two days doing what works for me, for you it could be yoga, baking, whatever! It was an instant sense of relief.

I don't know how many other people have been taking days off or if people are comfortable doing it, but I want the main takeaway from this to be to reach out, tell your team lead you're not doing well. Tell them you need a day off. Tell them you need a couple of days off it is your responsibility to acknowledge it and let them know.

No one is going to give you bonus points for working on a day you're really struggling. Fundamentally, you’re not going to be productive if you’re struggling. You need to recognize that in yourself – that the work is not going to be good work. You're going to make yourself feel ten times worse, and I think we're very lucky that Client Server don't want that for you. They don't want to put you through the wringer, essentially, if you can't perform.

Self-awareness was a really important part of this. You need to figure out what works for you to help you feel better. That's all it is. Maybe it is ringing a mate and having a big long chat. Maybe it is having a cry. Maybe you need to talk to someone, to find what works best for you. If I'm feeling particularly down, I don't go against it – that’s the only way you’ll figure out what works for you.

Not to be narcissistic about it, but I am the bloke that I like walking around the office. I'll come sit down beside you and have a chat. I'll find excuses to make people laugh. There’s no shame in asking for time off to reset and figure that out. It will be the best call you make. I think this is just as important for people to hear – and it turns out that doing this blog post was what I really needed to get it off my chest, sharing it with my work colleagues and virtual strangers. If you’re in the mood for taking advice from a random Irish guy on LinkedIn, check in with yourself and if you need to, take a day off.