Nick Boulton: When we’re hit for six, should we blame Boris’ bowling?Posted about 2 years ago by Nick Boulton 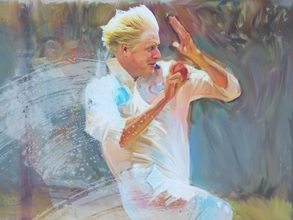 Is anyone else missing live sports? What I wouldn’t give for a distraction of two teams and a ball right now.

Perhaps the only thing more deflating than the sight of empty cricket ovals was the utterly baffling choice of words used by our Prime Minister last Sunday. If Boris Johnson was setting a field, he would have nine men at deep backward square leg, and himself at silly point. Which is fitting, because his points were all profoundly silly.

(Apologies to anyone who felt that analogy fly over their head and into the stands for six, but it feels like the longer lockdown persists, the longer the boundaries of common sense are.)

Let me spin a simpler analogy from the world of business. When planning their medium-long term future, business owners will grapple with three broad questions:

There are a million different ways you can answer those questions, but the big point is that they force you to focus and set realistic goals. Perhaps most pertinently, they force you to think of contingencies if/when things go wrong.

So am I out of order for asking our Prime Minister: Where the hell is the plan?

I was sitting on the edge of my seat, waiting eagerly on Sunday evening for word that there was a plan – that the PM and his cohorts had decent field in place.

Not disappointment that we weren’t allowed back to normal (whatever normal is) but disappointment at a missed opportunity for clarity and a Churchillian speech galvanising the country towards a COVID-19 exit strategy.

Don’t get me wrong – I wasn’t expecting rigorous details from Boris. My expectations were well and truly set when it took ‘our’ politicians nearly three years to enact Brexit, despite the country’s democratic decision to do so, so many months before. Brewery and piss-up spring to mind.

What I was hoping for was a sense of a plan. It might not be the one I want or agree with, but I feel confident we are clear in what we are trying to achieve, clear in what we have to do as a country, a community, a business owner and a father.

So, let’s kick the tyres of the PM’s speech by asking a test question: Do we go to work or not?

I believe he said – and I am paraphrasing here:

WTF? Wide of off stump and down to boundary for four byes. (Shit bowling, in other words.)

It would have been clearer if he had spoken in underwater Swahili! I’m mildly confused as to whether we are meant to be going back to work or not, much less what “level 3” actually means.

And what was with the mini PowerPoint? It looked as if it had been put together by my 7-year-old daughter in her science class!? (Oh, and I’m doing extremely well with home schooling by the way, I came top of the year 3 class for science last week.)

Can you sense of twinge of frustration?

Data and science may save lives in the short term, but the colossal knock on effect of our shattered economy, will surely cost even more, in lives, mental health issues, suicide rates and even more strain on our NHS. I can’t help wonder what the wider cost will be.

You can’t set a cricket field without a plan, and you sure as hell can’t lead a country of 65 million out of a lockdown without one. If we are being led by science and data, it needs to be distilled into something that we, as business owners, can use and make sense of.

These times call for the strongest type of leadership and for the hardest decisions to be made, something I really don’t envy. But cometh the hour, cometh the man.

C’mon, Boris. The ball’s in your hand. How are you going to deliver it?