Owen White: My Client Server storyPosted about 2 years ago by Owen White 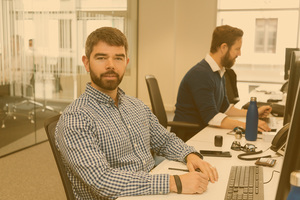 If you ever need someone to drive a forklift truck, I’m the man for the job. Although I haven’t driven one for 13 years, is my licence still valid?

I started my first job when I was 13 as a kitchen porter, then worked in a factory driving forklift trucks. I moved to Wales to play rugby and thought it would be a good idea to get a degree, so I studied Sport and Physical Education at UWIC. When I graduated, I moved back home to Cornwall and went back to working in the factory – small town, limited options. After a few months, I decided to move to London. If I was going to leave Cornwall for good, London would be the place to settle. My sister had already moved to London for university so I knew a few people who lived there and moved into my mate’s flat with six weeks’ worth of rent in my pocket so I was forced to find a job, and quickly, otherwise I would’ve had to go home and admit defeat to my parents – that wasn’t happening.

I interviewed at a few places and realised that I was good at interacting with people, I’m a social person and pretty straight talking, which people seemed to warm to, and after researching what career I could get into I chose sales. I thought I could make a lot of money from it and it suited my personality so it made sense to me. I continued interviewing and got a few offers back but decided to go with Client Server purely because of the people. I was going to be working under Nick Boulton who I thought was a cool bloke and could teach me a lot about recruitment as I knew nothing. The location of the office was also a big factor as it was in Esher rather than the city, which suited me as I’m a country bumpkin at heart, I could finally have the best of both worlds and now afford to pay my rent.

When I joined, I started off as a recruitment consultant but over the years my role has developed. I’m now the Head of Recruitment, which means my primary function is thinking about how we can grow the company. I’m proud of the fact that I’ve had an input in 99% of the decisions we make about hiring our staff and my main driver these days is seeing them perform well.

In such an uncertain time, I‘m facing a new challenge where I have to change my efforts to keeping the business in the best possible position so that when conditions improve we can bounce back. The difficulty of the role continues. However, I’ve worked through recessions and now a pandemic so I have no doubt that we will get through this and come out better on the other side.

Client Server has grown drastically. We started with 10 people in the countryside and now we are a company of nearly 80 in the City of London with an office in Sydney. But the important thing is that the quality and decency of the people has remained the same to the point where my colleagues are people who I class as friends.

The forever changing nature of Client Server keeps it interesting and it’s exciting to be a part of and I hope that in the future I can become a director and be responsible for the operational side of the business. So now it’s about getting to a stage professionally where I’m experienced enough to own that side of things so that we can further facilitate the growth of the business, be it nationally or internationally, if more of us running the day-to-day company there’s more time for the other directors to look further into the future.

I’ve been at Client Server for 12 and a half years now, which in the recruitment industry is basically a lifetime. I suppose the cool thing about all of this is that I started from the bottom and I’ve managed to climb the ladder to board level with shares in the company. It shows that if it’s possible for a guy who once drove forklifts, it’s possible for anyone.