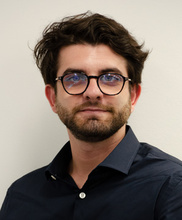 Growing up in Italy, I always wanted to learn how to speak English. So at 21, I moved to England so that I could. While working as a kitchen porter and a bartender for nearly three years, I learned both English and Spanish (I worked with a lot of Hispanic people, so I busted their balls to teach me).

I became fluent enough in English to be able to study Criminology at the University of West London as I wanted to become a police officer. That didn’t materialise after I graduated and I became an estate agent instead, which I loved. I was investing in myself, gaining new knowledge and experiences and that’s where my passion for sales started.

After a year and a half as an estate agent, my aspirations changed. I wanted a job that didn’t travel around so much, so I looked into recruitment. Obviously the earning potential was an easy persuader, but I didn’t know anything about the industry - or the technology industry, for that matter. I based my approach on the fact that technology is future-proofed; we are continually making technological advancements, so why not invest my time into aiding that?

When I joined Client Server, I undertook its in-depth training course to get me up to speed, and I’m still learning now. Currently, I’m working on the European desk , which I’m loving as I get to build relationships with people from all over Europe with all different backgrounds. I recruit across a number of different technology fields, which is great because I get to learn more about them which is challenging, but it keeps me interested.

What I’ve found in my role is that you have to be flexible. You’re dealing with so many different people who speak different languages with different backgrounds and needs. I have a really cool team and I like that it’s a meritocracy. If we deliver, we progress. This has motivated me to do better. Everyone has been really supportive and if you have a problem, everyone is willing to help which is really unusual in sales, and it creates a healthy and enjoyable environment.

I’ve been at Client Server for eight months now, from knowing nothing to having the ability to successfully place people in their roles, whatever I’ve been doing is working! I definitely want to grow with Client Server and within the company by becoming a senior member of staff and then see what happens.

Client Server’s Europe Team recruits for technology roles across the continent, from Paris to Warsaw and everywhere in between. Talk to us today about how we can help you find your next role.