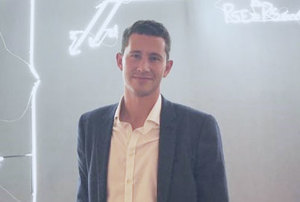 I was fortunate enough to land my first job at a financial technology recruitment company where I worked my way up from the bottom to becoming a Vice President of the company and leading our entire development team. After working there for seven and a half years, and having seen the company grow from 12 to nearly 70, I decided that I wanted to experience and learn different approaches to recruitment.

I’d heard great things about Client Server in the market on how they operated and knew they had a good reputation with their delivery - I would know, I spent seven and a half years competing with them. So it was an obvious move towards my next step.

I joined Client Server with the intention of bringing my experience as a Team Lead across but no one wants a newbie coming in and telling you what to do, especially when they have nothing to show for it. The first thing I had to do was learn the Client Server way of doing things, which was incredibly eye-opening for me as it was taking what I knew but applying it in a more efficient and effective way.

After putting through a few deals as well as bringing on a few clients I like to think I’ve proved to my team I know what I’m doing and from the start of the year I took ownership of the C# desk quickly followed by the C++ desk in April. We’ve had a great start to the year with the team being very close to 50% of our target after 5 months and everyone in the team contributing. Market conditions have only gotten tougher but we’ve adapted well and managed to keep up a good level of success.

I’ve enjoyed my time at Client Server because they care about the detail behind recruitment and go into the nitty gritty of the job. Previously I’ve seen companies that have the big picture ideas but struggle in taking the time and resources to implement that on a micro-level, such as planning out every aspect of a recruiter’s day and designing systems and processes that make each part easier. We’re very fortunate in that we have a leadership team whose skills compliment perfectly to do both of these things.

After 9 years’ in recruitment, I can’t think of anything else I’d rather do. Despite really enjoying the leadership aspect of my role, particularly helping consultants better understand the job and how to improve themselves, nothing quite beats the thrill of each individual placement. A lot of people see recruitment as a quick way to make money but the ones who are successful, who actually care about finding the right opportunity for the candidates they work with, that’s what I think I’ve always enjoyed. It’s a hard slog and I’ve seen many people come and go from the industry but if you think it’s for you there isn’t a better place to do it than at Client Server.