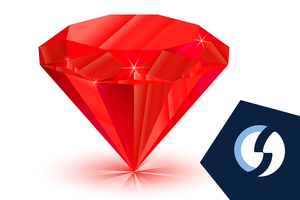 Even though Python , Javascript , and Java are three of the most popular programming languages right now, spare a thought for Ruby on Rails .

Ruby on Rails was popular among Web 2.0 developers - even Github was built on it. Although Ruby has negatives, it's still one of the most reliable, mature and stable languages. There's a reason senior Ruby on Rails developers come with heavy price tags.

Here are five big reasons why Ruby on Rails is still a popular programming language in 2020.

1) Ruby on Rails is quick to develop

When it comes to developing a project, Rails is slick. Developing a product with Ruby on Rails is quick and simple to put together. It's estimated that developers who use Ruby on Rails can build applications about 40% faster than other tech stacks. It's a favourite among start-ups and companies with an eye to release a MVP for a reason.

2) Ruby on Rails has a huge library

The Ruby on Rails community has a gem for everything. Ruby on Rails development teams have the luxury on focusing on logic without caring too much about minor implementations.

"Chances are that if you get stuck at developing a certain feature or implementing external application within your app, there probably already is a ready-to-use gem for it," writes Marcin Sulikowski.

3) Ruby on Rails is cost-effective

Ruby on Rails is an open source framework, saving clients from having to spend money on the framework itself. Plus, with the large number of gems available on GitHub, it means developers can save time and effort too.

4) Ruby on Rails IS scalable

The most noteworthy example cited for why Ruby isn't scalable was when Twitter switched to Scala to handle their growing number of user requests. But Ruby on Rails is more than suitable for scaling.

One way this can be done is through horizontal rather than vertical scaling. It means converting an app's architecture from two tiers to three. That means the server and load balancer (Nginx), app instances and database instances are located on different servers. That way, equal and smaller loads can be distributed among machines.

5) Ruby on Rails is secure

Using Ruby on Rails means following the Secure Development Lifecycle. There are a number of useful gems Ruby developers can use to provide all necessary authentication functions.

Client Sever is currently recruiting for a number of full time Ruby on Rails positions in London. Click here to view the latest Ruby on Rails job listings or call our expert consultants on 020 8016 4452 for more information.