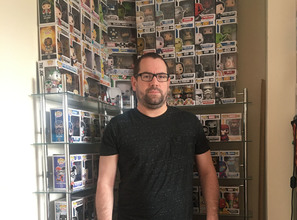 Minus being a bit of a geek when it comes to comics and movies, I’ve always liked meeting and speaking to new people. Working in sales, offering services to people has always been my line of work – and I’ve been pretty good at it.

But in 2003 I was reminded that life is short. My first wife passed away and I knew something had to change. I decided to follow one of my passions and travelled around Australia and Asia, where I ended up settling in Thailand for 10 years. I did odd jobs in sales and some bar work, and luckily for me I met my wife and we had a beautiful daughter. When she turned six, we decided to move back to the UK.

Instead of just working hard, I wanted to work smarter and closer to home. Having a good network around me presented a lot of opportunities. Before I stepped off the plane, I had an interview with a recruitment company in Southend that my friend worked for. My first job in recruitment was as a recruitment consultant and over time I knew that I preferred travelling to see and speak to clients.

When an opening appeared, I moved into the company’s Business Relationship Management team. I set a lot of records which are unbeaten to this day. Within a year, I was promoted to Head of Business Management and grew a thriving team.

It got to a point where I didn’t feel challenged anymore. So I decided to join another mate who had a start-up recruitment company and started doing 360 recruitment. Then another friend of mine started his own recruitment company and needed someone on a short term basis to attract new clients with a European focus. When that contract ended, I reached out to Thomas Robinson , who said I should join Client Server. I bit the bullet to commute to London. I thought my wife would hate the idea – she loves it.

After getting used to the commute and getting an idea about the Client Server way, I just wanted to jump on the phones and set up meetings. I’ve worked and spoken to a lot of companies where people don’t do their jobs properly or they’ve been let down by recruitment companies. I’m now in a position and in a company that can help – I know that we deliver.

I know that this industry is saturated, but that doesn’t stop me from enjoying my job. I get to go out and meet people, I speak to them briefly and can deliver something to them in a short space of time. It’s a nice challenge and it’s made a lot easier when you have a good reputation in the market as a company.

I’ve been at Client Server for just under a year and I’ve got to know everyone quite well from being able to hot-desk around the teams. As Business Development (BD), everyone wants a piece of you. I’ve brought in some good quality companies with a big international presence and will continue to do so, as I’m committed to building Client Server. I can see myself being here forever, but I understand that it’s not just about me. I want to develop our BD offering in London and pass my knowledge onto the younger generation as we are all striving towards the same goal.