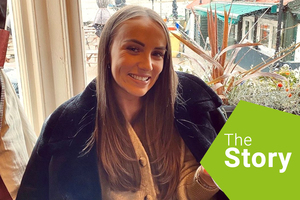 I always knew that I wanted to go travelling. So when I reached a dead-end at my first job, I decided it was time. My boyfriend and I went to the travel agent to research where we were going to go and with a leap of faith we ended up booking the trip there and then.

A few weeks later and we were off. We did the typical Asia and New Zealand backpacking but knew that we wanted to settle in Australia. I applied for a job that was in the same industry that I was in before: freight forwarding. But an agency poached me and offered me a role as a recruiter in engineering.

What was meant to be a year in Australia turned into four, as my boyfriend got his visa sponsored. But it was soon time to come home. I wanted to settle down, get a house and save for my wedding.

When I came back to the UK, I had a new-found confidence in myself. I felt I could to say “no” to things that I didn’t want. It was important for me to find a company that had a good culture. I lived in Brisbane which is so chilled and coming back to London was scary, I was anxious to know how I would adapt. A job is a job but if you go to work and you like the people it really helps. The people are the job. I haven’t worked in a company that I hated and I didn’t want to start now.

I put up a post on LinkedIn to say I was coming back to the UK and open to new opportunities. Shortly after, I received a message from Fran in the Internal Recruitment team at Client Server.

The thing that attracted me was Client Server’s split-desk model. I had done business development in the past and wasn’t keen on doing it again. Technology was also a completely new field for me, so I was keen to meet them face-to-face so I could get as much information as possible.

After coming into the office, I had all the information I needed. Everyone was supportive and honest about their experiences. Most people I spoke to had been at Client Server for a number of years which gave me a good feeling as there was longevity in the company.

Ten months later, and I have no regrets about moving into a new area. The first few months were intense but the training was really good – no question is stupid and everyone is collaborative. You can go up to anyone and they would offer to help you. Even the directors are approachable.

Being in recruitment gives you such a good feeling when you place someone in a new job that they’re happy to stay in for a long time. Their feedback is really rewarding. There are always downs in every job and in recruitment when it’s good it’s great, and when it’s bad it’s awful. But being in a team surrounded with people that are in the same situation as you motivates you to keep on going and make someone’s day.