Lucy White: My Client Server StoryPosted over 2 years ago by Lucy White 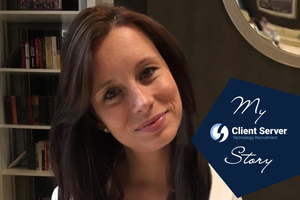 Like most people, I didn’t know what I wanted to do when I left school. I took a generic degree in business at Leeds University hoping that after I graduated, I would have that lightbulb moment… but it didn’t happen.

I started working in a local pub in Kingston and one of our regulars owned their own recruitment company. They said my personality would suit recruitment. I love talking to new people and I’m generally interested in what people would say, so I thought I would give it a go.

I never had any intentions of getting into recruitment, but once I interviewed for a recruitment consultant position and got the job, there was no going back.

The first company I worked for was in a converted loft in the owner’s house. It was a small team, but I guess I was finding my way and it taught me a lot about the industry. After three years, I wanted more and I knew that I couldn’t progress in the company I was in. I started looking for recruitment companies in the area and came across Client Server and thought that the company seemed quite interesting as technology was a new sector for me.

Everything was a lot smarter than what I was used to. The location in Esher was great and there was about 15 employees at the time. It was a nice move to go into rather than going straight into a large corporate company where I think I would’ve been overwhelmed.

Shortly after I started, I realised that sales wasn’t for me. The emotional rollercoaster became too much – it didn’t suit my personality. So I was completely transparent and spoke to Nick , who understood and offered me a new role as his EA. This came at a perfect time as we were opening the London office so there was a lot of work to be done.

I loved working as an EA. My favourite part was planning the client entertainment which allowed me to learn so much more about the business side of the company and develop my understanding of our clients and how we can benefit them.

After having my children, I didn’t resume my EA position as it meant I would have to be in the London office. So to aid my work-life balance of being a mum and a career woman, I moved into the Office Manager role. Being a recruiter first has benefitted me massively, as I understand the business structure. It also means I can look after my team more effectively and grow it in line with the company, which is fun.

It’s almost 11 years since I joined Client Server and I’ve managed to have my finger in every part of the company. I know more about IT and have a better understanding of the software lifecycle and the recruitment side that goes along with it. It’s been amazing watching the company grow and being involved in all of the offices and helping hire people to continue the journey.

Over the years I’ve been awarded some insane incentives, two of them being holidays which have taken my husband and me to Peru and Borneo to see the orangutans. My next step is to get on the share scheme and be a leading representation for women in recruitment.