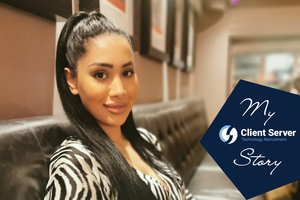 I made the decision to put my university degree on hold while I took some time out to figure out what I wanted to do. I was offered a role as an operations analyst working within St Mary Axe and one of my clients at the time happened to be a consultancy focusing on Life Sciences and Pharmaceutical. I was approached by one of the CEOs asking whether I would be interested in a role.

I knew nothing about recruitment, but I thought if they think I would be good, I should explore my options first.

A few interviews later, and I started my first recruitment consultant position specialising in accountancy and finance. After two-and-a-half years, I moved into technology which sounded interesting at the time. Everyone I spoke to was really enthusiastic and passionate about their work, which was refreshing.

But after four years in recruitment, I decided it was time for a break. I wanted to see the world and had a few destinations to tick off my list. This was a good time to reflect and decide what I wanted my next steps to be.

I had been thinking about going into internal recruitment rather than agency as I had had enough of the sales side of recruitment. When I came back to the UK, I went to a few different interviews but I accepted a role with Client Server as it’s delivery-focused.

I was offered the opportunity to join TEAM JAVA which I’m so grateful for, since joining the team I was lucky to be a part of winning team of the year 2019, as well being surrounded by collaborative, focused and driven team players. My manager has been a great mentor and offers ongoing support which is extremely important in such a volatile market. I believe this has definitely contributed towards my success and motivation within my role.

As a company, we work with such high profile clients who have a strict standard of candidates that they require. Being able to be selective in identifying key talent is challenging but the key to success. If you get that right and then connect them with the right company, there’s no doubt that they would advance within the business, which is amazing to be a part of.