The Story: The rumours of Ruby's death have been exaggeratedPosted almost 2 years ago by Michael Oliver 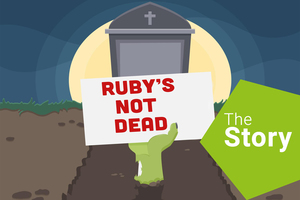 Mitchell Lane is the CTO of residential construction SaaS startup Buildbook. He has worked in Ruby as his primary language for ten years and has hired about 100 Ruby devs across his career. He talked with Client Server Marketing Manager Michael Oliver about why rumours of Ruby's death have been exaggerated.


Michael Oliver : It's almost a trope among tech commentators and writers to say that a language is 'dying' - certainly, many have said that of Ruby. What are your thoughts on Ruby's longevity?

Mitchell Lane : I don't think that Ruby is dying. I think the issue is that the Ruby ecosystem was artificially overinflated for a few years. The coding bootcamp boom that really hit its peak in 2013/2014-ish, and practically every fresh bootcamp was teaching Rails as its primary web development tech stack. This caused a huge boom in the number of junior level Ruby/Rails developers, and a boom in related content, gems, etc in the ecosystem as those junior devs tried to make a name for themselves.

Now that bootcamps have pivoted to full-stack JavaScript, the Ruby bubble popped (around 2016 or so), and we're back to a more healthy place. The ecosystem is still going strong and growing, but if you just look at the last five years, it looks like it dipped down a good bit from its peak. But that peak was artificial, in my opinion, and if you look at the longer timeline, the trendline is still moving upwards.

MO : A hiring manager I spoke to described finding a senior Ruby dev looking for a job as like a needle in a haystack. Do you agree it's difficult to find senior Ruby devs, and if so, why?

ML : There are still plenty of companies hiring Ruby developers - big tech companies like Microsoft and Amazon, mid-tier companies like Shopify and Airbnb, and a wide range of smaller companies and startups, including my own. I will say that in my experience, Ruby is somewhat regional, but so are other languages (for example, .NET is much more popular in Seattle because of Microsoft's presence there). So some US cities are much bigger with Ruby than others.

​ MO : What should companies looking to hire Ruby devs be offering?

ML : There isn't any one thing that will attract Ruby devs specifically. It's the same stuff that attracts any good dev. There's no secret to it. Pay well, have a good team, and/or have an interesting product. You don't have to have all three, but if you don't have a good team and you have a boring product, you damn well better be paying well. These are the table stakes issues. Everything else is much more minor, and more about minor flavouring and personal preferences.

Client Server is recruiting for a number of mid-senior Ruby developers for companies in London and the rest of the UK. Discover our latest Ruby roles here or contact our Open Source Team on 020 8016 4452 .