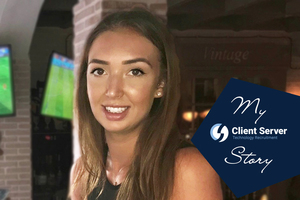 I’ve been working since I was 14. My first job was a paper round and I babysat on the side, and I also helped out on weekends at a clay pigeon shooting company.

One of my passions in life is travelling. I love experiencing new cultures and different cities, I’ve been to more than 25 countries so far. My favourite has to be Sri Lanka, I love elephants and I got to go to an elephant sanctuary which was a dream come true. I also got to explore the country as I moved around for three weeks.

As I was so interested in travelling, I decided to study travel and tourism at college. I’ve never thought of myself as an academic, so when I finished college I knew I wanted to start working full time so I could continue to make my own money.

I started working as a customer assistant at a supermarket and I was approached by one of the customers. They owned a recruitment company and said I should interview for the office manager position at their company. So I did. I got the job and worked there for a year and a half. I enjoyed what I did but I was on my own. I’ve always been a bubbly person who likes to socialise, so I felt quite isolated there.

I told my cousin about it as we both worked in recruitment companies and she told me about an office admin role at her company. I would be working in a team and it was in the technology sector, which was new for me. I knew nothing about technology, but I thought that the admin role would allow me to progress within the company. So I applied to the role at Client Server and got the job.

It was nice when I started to have my cousin here as I would see a friendly face when I would go to the London office which I feel made me fit in really well. I took each day as it came and now, two and a half years later, I’m still here.

I’ve really enjoyed supporting people, it’s quite satisfying knowing that you’re helping the company achieve its goals which creates a real buzz in the office. Not to mention the incentives are great – one of which was a holiday voucher which I spent on a long weekend in Barcelona! I can also earn commission in my role which is always a bonus.

I’ve been learning since day one. Recruitment, especially in the IT industry, is very interesting. I’m always finding out different technologies and what they mean and my knowledge has grown.

I got promoted to a senior administrator after a year and a half of being here because I had hit all my targets. Everyone has the same chance to achieve what you want. So I want to continue working my way up and travel more. I have Indonesia to tick off my list next!.