Everybody’s Responsibility: Nina McNamara on the future of UX and diversity in techPosted about 2 years ago by Michael Oliver 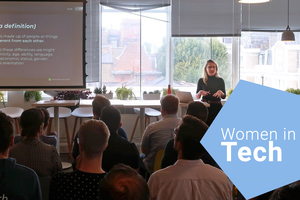 By day, Nina McNamara is Design Lead at Kaluza, an ecosystem of intelligent platforms powering the future of energy. By night, she's an entrepreneur, mentor, and staunch advocate for diversity in tech. She spoke with Client Server's Michael Oliver about the challenges facing the world of UX and why diverse workforces make tech companies better.

Michael Oliver : How would you explain what ‘UX’ is to a layperson?

Nina McNamara : I would say that UX is about simplifying complex problems. Ultimately, that's all it is. There's a whole lot of complexity within the technology sector. Most of the time, you're trying to communicate to others who don't understand what you do or why you're doing something on a deep level. So the job of a UXer is to understand other people's understanding and to be the voice of the customer in any given room.

Michael Oliver : Storytelling plays a big part in UX as well, how do you blend that aspect of UX with the tech-focused areas?

Nina McNamara : It's a very big challenge. A lot of the language used in tech can be quite harsh and cold and I think UX is in danger of over-complicating its own field. UX is a science, it's probably more science than art, to be honest. But storytelling is how you make people care and make it relatable. It's where you bring balance between the science and the art aspects. It's about more than the screen in front of a customer, it's everything from the point where you decide to build something. That's when you should be thinking about the story you're trying to tell and, ultimately, how to answer the question "What's the point of doing this?"

Nina McNamara : That it's everybody's responsibility - the customer experience is everybody's responsibility. Obviously, a UX person is the ambassador of that and they're the gatherer of information around that, but it's not just their job to talk about it. Don't get me wrong, UX people see things holistically and can be really useful because they don't just see things from just a business or technical point of view, it's everything. That's why having businesses recognise that UX isn't just design and the fluffy stuff is so important.

Michael Oliver : How do you see UX evolving?

Nina McNamara : For me, it involves bringing together people from all kinds of backgrounds, particularly those who aren't necessarily from a formal design background. I'm a big believer of everyone trying a bit of everything because you never know what's going to serve you in the future. I'm not suggesting there's no room for specialists, being on top of one area of UX is really valid. But it's not a good idea to close yourself off to other areas of it. I think design is inherent across the whole UX spectrum and there are so many elements to it - it needs a bit of everything to really work.

Michael Oliver : You're a staunch advocate for diversity in the tech sector. Is it more than a numbers game?

Nina McNamara : I think it's a good thing that numbers get highlighted, but what I think needs to evolve is the root cause of those numbers. The numbers say only 17% of the tech workforce are women - so in order to address it, we need to do so from all sides. That includes schools, universities, and workplaces. It's about ensuring that people regardless of gender know that tech is for everybody.

Michael Oliver : What about the workplace?

Nina McNamara : Yeah, it's all well and good increasing the diversity of your tech teams, but once somebody is there, they have to feel like they belong and they have to feel like they can grow and be heard. It's not just between men and women, but it spans the entire gender spectrum. When I went into more traditional tech companies, it was a big, big shift for me because I was like, "Oh wow. I didn't realise that this would actually impede me to be a woman or I might not get listened to, or somebody might have an unconscious bias towards me." And it certainly happens.

Michael Oliver : What should the directors of tech companies be thinking about to build a more inclusive environment?

Nina McNamara : I think certainly having a leadership role that is something like the head of diversity or director of diversity. The message it sends when you have a committed role to that is that it's not just somebody who's taken on that role on top of their own. What often happens is that you have women in tech companies who take on diversity initiatives, working groups, and events who end up taking time out of their working day to pursue that. It's a bit counter-productive to say "Well, I'm spending all this time fighting for women in tech, but actually, that's taking me away from some of the opportunities within my career." But when you have a diversity leader, that's their job. It sends a signal that diversity is a key objective and result for your company.

Michael Oliver : Is there a difficulty in translating that shift beyond a company's walls?

Nina McNamara : It becomes quite challenging I think with when you're a company that maybe works with clients, that's quite difficult because you're not necessarily in full control of the culture of a client that maybe has an archaic culture, that can be quite challenging. And that's some experiences that I've had. And in that case, it's really, really hard to call out a client because you don't want to ruin that relationship. Part of making a diverse company that you would want to work for is making tough decisions about who you work with and saying, "No, maybe we don't work with those clients that are like that." It's very difficult because there's financial stuff involved, but it's probably just a mix of integrity versus financial liability.

Michael Oliver : If you think about where you would like to be in the next five years, what does the world around you look like?

Nina McNamara : At Kaluza, we have a fairly new leadership team who've come in and have a very, very high percentage of women. So to me, that already is a gigantic win. There's diversity there outside of gender bodies, there are all these different backgrounds, there are people with 20 years’ experience or more in that team. I think for me, it's about saying, "Okay, in the next five years, how do I get the most out of learning from those people?" And then trying to find my own place in that leadership world. For me, as a design lead, I would love to be the kind of leader that would make young girls or young people want to come into work in tech. I would like to see in five years that there's a spot for me there to be completely myself and be an inspirational leader to other people who are maybe slightly less conventional in the way that you might see a CEO or a director. I'd love for other people to be able to say, "Hey, look, that girl from Manchester is director of this company and I can do that too."