Are numbers enough? A look at TrustRadius' 2020 Women in Tech ReportPosted over 1 year ago by Jessica Robinson 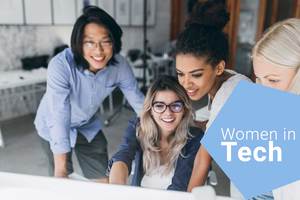 The conversation about the tech industry’s gender gap is dominated by stats. Only 17% of the UK’s tech workforce is made up of women, with only 3% saying a career in technology is their first choice.

As companies plan and implement policies to improve these numbers, it’s clear the issue is not as straightforward as it appears.

The TrustRadius 2020 Women in Tech Report highlights the gender gap within the tech industry is reinforced factors like company culture, double standards of performance, disproportionate representation, and shows why companies must adopt a deliberate intersectional approach when looking to remedy gender-related issues.

A startling 71% of women surveyed agreed there was a pervasive “bro culture” or “boys club” mentality in a tech company they have worked in, a culture that is understood to be facilitated by management and ‘double standards of performance’. Women surveyed highlighted reinforcing factors from empty policies to gendered language and an overarching lack of representation in leadership positions.

Unsurprisingly, opinions were divided on solutions. Filling seats and ticking diversity boxes aren’t enough when all aspects of gender inequality are not taken into consideration, both inside and outside the workplace. One notable trend was clear: being valued, respected and supported with transparent opportunities for growth and development are all factors present in a gender-supportive company.

The TrustRadius study also incorporated valuable and highly important statistics on diversity, taking an intersectional view that incorporated gender, race, age, ability, sexuality and veteran status. Here, the survey compared the views of minority and marginalised groups and men on the same issues, focusing on whether respondents believed their company was above average, average or below average in diversity stakes.

The data collected reflects that men outnumber women in meetings on average 3:1. Disproportionate representation leaves the minority group having to compromise, or ‘fight to make space’ in an environment not designed to primarily serve them. With men more likely to occupy leadership positions, they may be more likely to let their own experience impact their perception of diversity, and therefore the wider workplace.

When formulating policies and plans to support the inclusion of women, an intersectional approach is imperative. Women of colour are on average less confident than white women that they would achieve a promotion in the first two years, 58% compared to 63%. Opportunities for growth feel more limited to women of colour as companies are less likely to support entrepreneurial endeavours, and women across the board are more likely to experience ‘imposter syndrome’ than men.

The TrustRadius study reflects that gender inequality is a complex and multi-faceted issue. Prioritising a one-size-fits-all, statistics-driven approach to bridge the gender gap would be entirely ineffective, as it ignores marginalised subgroups. Companies must create emotionally intelligent, well-informed policies that permeate company culture and break down social barriers to facilitate change.