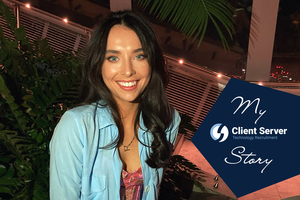 My Client Server Story starts when I was nine. One day I became really ill and no one knew why.

At the beginning I came up with a rash. I then lost the ability to be able to sit it up or stand up properly for more than a minute. I had paralysis down one side of my body and my vision was blurred. I was taken out of school due to being in and out of hospital, so having a normal childhood was alien to me.

After nearly ten years I was diagnosed. I had Lymes Disease. An infected Tick had bitten me when I was nine. It was hard to diagnose as everyone’s symptoms differ but a rash is the most common symptom and the number of cases are rising, so more people are aware now.

I started my treatment plan that lasted for a year. Slowly but surely, I began to feel stronger and stronger until I got back to health.

I remember seeing all of my friends posting and talking about university and I felt jealous, I wanted to go too. I decided that day that I wanted to do my A Levels so that I could go to university. I got the syllabus, worked hard, passed my exams and got into Southampton University and had the best time of my life.

I studied Sociology and Criminology because they really interested me (I love a good crime drama). However, I wasn’t thinking ahead. My degree is one of the most unemployable degrees and you have to do a year of frontline policing before you could even think about getting a career out of it. So I thought maybe it’s not for me. But at least one good thing came out of my university experience - I entered a raffle and won flights to Asia! I got to travel for a few months around Indonesia and Bali, which was life changing.

On my return, I started working as a PA to the CEO at a Chinese digital marketing agency. I was really interested in the marketing side but I never really had a chance to get into it. So I moved to another agency where I was working on our TV Licences, which sounds quite boring but it was really fun.

I wanted to explore more and interviewed for an admin role at Client Server. When I left I didn’t know how I had done, but they invited me back to interview for an advertising role that had just come up. At every stage I would say I don’t know anything about technology but they reassured me that I could learn on the job, so I did.

A year later and my knowledge has grown. I’ve been supported immensely by my manager Karen , every question is welcome and nothing is off limits. I’ve been able to develop and mould the role into my own. I really enjoy writing so researching and copywriting has been really fulfilling. I want to progress in advertising and learn more about it and the technology industry. I also want to get more involved in other aspect of the company which would allow me to grow my role and see where it goes.

I never envisioned myself in this environment so I really enjoy the day-to-day life. Everyone gets on with each other and I feel like everyone enjoys what they’re doing. I’m so grateful that I avoided the negative narrative when I was ill. Nothing is worth giving up on any aspect of your life and I’m proud that I was strong enough and resilient enough in the face of adversity. I still have a lot to learn but I’m embracing every moment.