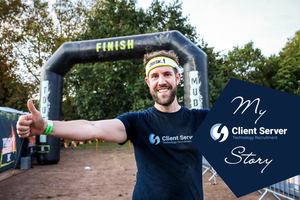 Have you ever walked out of a room and never looked back? I did that once and it was the best decision I ever made.

I was sitting in a law school lecture theatre at Victoria University of Wellington in New Zealand. Picture a decidedly awkward 19-year-old trying to keep his eyes open as a law professor drones on about contract law.

Amid the PowerPoint slides and persistent hum of the air con, I was struck by a ‘Eureka Moment’: I hate this, I don’t want to be a lawyer, so why am I here?

So I picked up my stuff and walked out and never set foot in another law class. See you in hell, law school.

This act of quiet defiance was met with the immediate realisation that there was no Plan B. I firebombed two years of study to do… what? To countenance fear of failure (and keep my parents on the sweet side) I pursued a joint degree in English and Media Studies which I took to honours level.

(“Honours” is an extra year of study beyond the requisite requirements of a degree – think of it as a precursor to a Masters.)

I embarked on my honours year and I struggled . It was physically and mentally exhausting. I was always tired, I had aches and pains and muscle soreness. A routine blood test unearthed more than a decent bout of flu: I had an autoimmune disease. My immune system had started attacking everything from my neck down. My body was at war and I got progressively sicker. My doctors and family thought the worst: I had lost 25kg and put on bed rest indefinitely.

I moved back home and spent a year resting and slowly rebuilding my strength. Once I got better I had a profound sense of urgency. I didn’t want to waste any more time.

Everything I had been studying all coalesced around a particular career path…Journalism. I moved to Auckland and got into journalism school. The very first story I wrote led the national news and I thought “I think this is it.”

My first job after graduating was for a sports news website. I then moved to the Radio Network, New Zealand’s version of LBC. They had a programme called “The Farming Show” and needed a journo, newsreader and marketing manager - so I became all three. But it was a weird proposition writing about New Zealand’s farming scene from deep in the heart of Auckland CBD. Turns out the company agreed and moved the job to a rural centre. I was left with a decent payout but, again, no idea about what to do next.

I had a choice: get another journalist job or try something different. I applied for a working holiday visa to the UK determined to ‘make good’ on that promise to not waste any more time.

London is a place that will find ways to break you apart, but it also finds ways to put you back together. I learned the hard way the value of making connections and pushing yourself forward. Nothing comes easy in this city.

I had a casual stint at the Guardian working as a weekend/after-hours sports video producer. I spent a lot of time in plush newsrooms by myself with no one to talk to or learn from. The journalism scene in the UK was really hard to get into and it wasn’t going to work for me here.

I picked up a job in a charity call centre to make ends meet. It sucked. It sucked the moon right out of the sky. I was days away from packing up my bits and moving back to New Zealand… until I got wind of a temp marketing job with the Recruitment and Employment Confederation. What started as a temp role turned into four years.

In late 2018, Owen White reached out to me on LinkedIn about a marketing role at Client Server. It was immediately clear the role was the blank canvas I was looking for.

Marketing is one of the few areas of the company that has a birds-eye view of everything. So to be successful you need to be able to understand all aspects of the business, which I think I’ve achieved. Marketing is now recognised as an integral function within Client Server. They’ve given me the space to be as creative as I want. They’re honestly up for anything if you can make the case.

I look back on the last two years and have a portfolio of success which is immensely satisfying. But I haven’t finished what I came here to do, there will always be more to do as the industry is always changing.

People say they fall into recruitment, but I fell into marketing. I’ve gone through most of my life, especially in my early twenties being completely unsure about what I was doing and myself. But over the last few years, I’ve focused on what I’m good at. I know who I am now, I’m Marketing Mike, so what’s next?