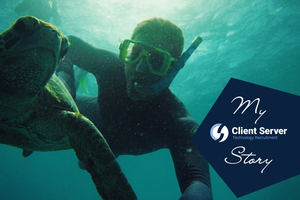 When I left university, I thought it was the right time for me to go travelling. It’s something I always wanted to do, as I always enjoyed going on holiday. I quite fancied the idea of Australia as my aunty and uncle lived out there and spoke highly of it, so I wanted to see for myself.

I travelled around East Asia for six months embarking on finding the best food spots which I found in Vietnam – their beer was incredible also.

I had planned to be in Australia for a year, so the first job I found was in telesales. But I was filling the time before the ski season started so that I could work there. Those three months were the highlight of the trip and when it ended I was back to telesales before I returned home.

When I arrived back in the UK, there was a lack of jobs in the market apart from recruitment, so I had to find out why. I started working at Michael Page, which was a good introduction to the highs and lows of recruitment. I was placed into running contract data roles and continued doing that for three years. I knew it was time for a change, I had experienced a big organisation and the city life, but I wanted something that was closer to home so I could have a better work-life balance.

I had received a message from Kat from Internal Recruitment at Client Server for a role at their Esher office in the contracts team which appealed to me. I would be doing a similar role and it was close to my home - the London commutes were becoming very tiresome. So I decided to take the role and got stuck in.

I learned the ropes, worked hard, and adjusted to the new environment. Within my first year, I billed my highest month making £85,000! You can’t beat that. But to be able to do this, you have to understand what you’re recruiting and the market you’re recruiting in. Sometimes you have to find a candidate in an out of the box way to fit very difficult roles. But when you do it's really rewarding.

Recently, I’ve moved into permanent jobs around the UK which is a different process to contract jobs in London. I’ve had to brush up on my geography skills but at least I’m surrounded by the same people, I’ve just moved a few desks over.

I’ve been here for three years now, and I want to continue to climb the ladder. My next step is becoming a senior consultant. I’m surrounded by amazing people who are like-minded and similar to myself so we all get on well. It’s so important to enjoy your job and they are a big part of my enjoyment.

Working for a smaller company has its benefits too. Senior management is more accessible and change can happen instantly. We recently started looking into our wellbeing policies, which management could’ve easily given us a new policy and sent us on our way. But they’ve taken the time to make it an employee-led initiative and allowed us to get involved in the process if we want to. I think it’s a really positive move in the right direction and continue to find that balance.

When I started in recruitment, I had a question of why there so many available jobs in recruitment. After six years, I still can’t answer that question, because why wouldn’t you want a job in recruitment?