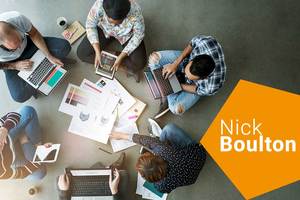 Last week, I had one of the more interesting conversations with a candidate I’ve had in a while.

They were a very senior technical manager working at a well-known Fortune 500 technology firm (let’s just call it ‘Pear’). It’s a company most technologists we speak to would give their right arm to join.

You’d think they’d found the Holy Grail, right? But what really struck me was that this candidate actually wanted to leave ‘Pear’ and fast . Plus, they were happy to take a significant pay cut to do so, even more unusual in these uncertain times.

It caught me off guard, but I was intrigued. Was this a one-off, or a pattern that was starting to emerge?

I started doing some investigating. I spoke with colleagues, clients – even old clients – many of whom were shocked I still knew how to use a phone, as my sales days are well and truly behind me. What I learned was that it’s not just a one-off, it’s happening on a weekly basis.

I surprised and buoyed for a couple of reasons:

We owe a lot to these titans of industry, behemoths of technology that will always attract the best talent. Top graduates flock in their thousands to join them and always will, they have changed the landscape of technology forever, continually amazing and reinventing, while occasionally paying a TAX bill (maybe that’s for another blog).

They create huge employment opportunities and are vital to not only large capital cities but to more rural microeconomics.

Even though they look great on a CV and most employers will jump at the opportunity to hire someone from one of these giants, I still believe some of the best career opportunities lie right here within our great start-up community.

Where else can you have a direct impact on the day-to-day success of a business than if you are right at the coal-face of it? Whether it be technology, business or strategy, you get to see your ideas, plans and contributions come to fruition on a daily basis.

I think this is a great time to be involved in technology. Look at the long list of the hugely successful business founded during recessions:

Which companies will be next on this list, founded, forged or built on this recession? And why wouldn’t you want to be part of that?