David Kerr: My Client Server StoryPosted about 2 years ago by David Kerr 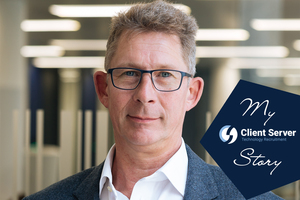 My story starts quite a long time ago…

I started my career as an aeronautical engineer at Rolls Royce specialising in military aircraft engines – the Pegasus for Harrier Jump Jets and RB199 for Tornado Euro Fighter planes. After ten years, I decided I needed a change. I felt that there was more to life than jet engines and the smell of aviation fuel – it was time for a new adventure.

In my late twenties, I left Rolls Royce and headed to the south of France where I spent a year teaching water sports.  When I returned to the UK, I had long hair and a great tan, but no job and absolutely no money. Luckily, I quickly secured a very well-paid contract role as an engineer. When that contract came to an end, the recruitment company suggested a variety of jobs ranging from working at an airport to an oil refinery and even working in the engine room of the QE II ocean liner – none were for me. I began to realise I didn’t want to be an engineer anymore, so I met with the recruiter to discuss what options were available.

Within 30 minutes, he asked if I had ever considered a career in recruitment and suggested I sit a psychometric test. Although this was something I had never thought of and I knew nothing about the industry. I thought “Why not?”

A week later, I had a haircut, bought my first work suit and commenced my recruitment career with a well-known sales recruitment company in the South West. I joined the team who specialised in technical sales, which fitted my background as I was able to understand the products and services. I was very fortunate to have joined the most successful team in the company and be trained by some of the best recruiters in the business.

In the early 90s, the economy crashed and the job market collapsed. I was fortunate to be offered a role with a management consultancy firm. I worked all over the country analysing business processes with a view to improving productivity without increasing capital spend. While working on a particularly bad project, I spoke to a former client from my recruitment days. Luckily enough, the Sales Director remembered me, so I asked if he had any available roles. He said: “If you’re serious, come in for an interview tomorrow”. I ended up joining Morgan Crucible as a salesman and was rapidly promoted to Sales Manager. I was subsequently poached by another company as Sales Director. It was great. I was well paid, driving a nice new car and living the dream!

My first responsibility was to recruit a new national sales team of 23 salespeople. This was made all the more challenging by the number of atrocious recruitment companies I had to deal with. On an almost daily basis, I found myself thinking that, if I ran my own company, I could do so much better than this.

Almost two years later, by sheer coincidence, I met David Cooper who was a recruiter in the tech space. At that time, David was extremely disgruntled with his employer’s working practices and processes which focused on bombarding companies with CVs rather than matching suitable candidates with a role. The more we discussed the way in which many recruitment companies were run, we realised that we would and could do it better and, as a result, Client Server was born.

I’ve made it all sound very easy, but I had many reservations. I had a great career, a good relationship with my boss and worked with an incredible team, and I can’t forget the car! Setting up our own business was an incredible risk. While I was sure I knew how to recruit great people, the tech space was well outside of my comfort zone. At that time, I don’t believe I had actually even sent an email! Why would I set up a recruitment company in a business sector I knew nothing about?