Should you be brutally honest, no matter what?Posted over 1 year ago by Nick Boulton 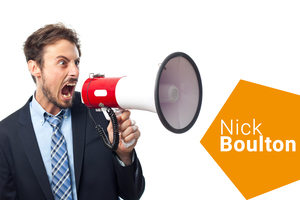 Well, actually no. I think this is actually a very misunderstood statement, one that needs a little demystifying.

Too often being “brutally honest” gets used by people claiming to be great leaders, mentors, or work colleagues. But I think it’s used by people who are just pushing their uninformed opinions on other people.

And more worryingly, what often accompanies “brutal honesty” is belittling, undermining and casual bullying, all in the name of “honesty”.

Ever noticed how a “brutally honest opinion” is almost always negative?

I’ve never heard someone go “I’ve got to be brutally honest with you that was an extremely brilliant piece of work you just did”.

Those who enjoy being “brutally honest” are typically more interested in being brutal than they are in being honest.

And therein lies the difference, a very important one of being “honest” vs being “brutally honest”

Brutal by its pure definition, savagely violent , conjures up cruelty, negativity and an idea of dictatorship.

None of those traits are what we look for in leaders, colleagues or friends, is it?

Don’t get me wrong, straight-talking is extremely important, in fact, vital for success. But I’ve noticed that those who claim to be brutally honest are never quite so open when it comes to gratitude or praise. Why not be honest with those, too?

Sometimes difficult and uncomfortable things need to be said and honesty in saying them is very important. The major difference is honesty can be said with tact, thought and kindness.

At Client Server, we are trying to break the mould of that old school recruitment stigma and create a more positive, collaborative environment where people can thrive and build a career.

It’s pretty common for people to feel like they can’t be “too honest” as they might hurt someone’s feelings or offend them.

This is an excuse not to speak the truth and comes from a misunderstanding about what it means to be honest. Being honest has nothing to do with being angry, mean, or “letting off steam.” None of those emotions has anything to do with honesty. Being more honest is about being clearer, more specific, more understanding and more authentic.

These are the traits we look for in great Leaders, work colleagues and friends.

So, back to my original question: Should you be brutally honest, no matter what?

In a world with ever-increasing fake news, distrust, false information and a continuous battle for social standing, trust and honesty are vital traits in anyone who wants to succeed.

Whatever walk of life you choose, you will be incredibly successful if you are honest but most importantly, honest with yourself.

That is the type of culture and family we are trying to foster at Client Server.