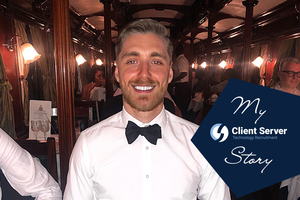 I really can’t complain about anything growing up. I lived with my mum and stepdad who is very successful, so it gave me a taste of success from a very young age. Seeing him have nice cars, houses and watches, I became a real workaholic from an early age and would always try to earn money here and there. I had a taste of the lifestyle, but it wasn’t mine. I hadn’t earned it. So my motivation was to get to the point where I did.

Both my dad and stepdad are salesmen and have done really well for themselves, so I thought why not get into sales? If it wasn’t for my stepdad, I would have skipped university and started working straight away but he explained the importance of getting a degree. After graduating with a degree in business my search for a sales role began.

I came across a job advert for a recruitment company that said you could earn £80,000 in your first year – my mind was blown. I applied and got the job.

I revelled in the fast-paced nature of the job, but looking back there was a lack of structure within the company which meant you either swam of sunk… And I sunk straight to the bottom. I was trying to deliver in a market that I now clearly realise hadn’t been established and failed to make a single deal for the seven months I was there and was let go. I began to wonder if recruitment was really for me. I was putting in the time and effort and it just wasn’t working.

I was referred to Client Server, who had a different business model than my previous company which I thought could benefit me. I would be going into an established team and they offered ongoing training. I worked harder than I’d ever worked before and picked it up quite quickly. I used the tools I was giving and made my first deal in my first month. I’ve never looked back – I’ve only not done a deal twice since then. I owe a lot of my success to Nick Heath for actually taking the time to help and train me because it’s not an easy job, as much as I hate to say it...he’s pretty good.

There is such a misconception on what makes a good recruiter. Everyone thinks recruitment is a bit sneaky or backhanded. We’re only in it for the money so will lie to candidates to get there. But it’s quite the opposite. We find exceptional people exceptional roles. It’s in our best interest to understand our candidates’ needs and passions aside from their CV and that’s a skill.

Recruitment isn’t about making candidates take jobs that they don’t want. We are here to provide an opportunity to showcase jobs that they wouldn’t necessarily stumble across. We might call you randomly during the day but it’s to potentially find you the job of your dreams. There’s no better feeling then changing someone’s life for the better because you’ve done your job properly.

By March 2021, I would have been here for four years and the reason I’ve stayed so long is because you get out what you put in. When you work 12 hour days, you have to love near enough everything about your job. Some might call me a workaholic, but within good reason. You can progress your career quicker than most professions and I’ve been rewarded for my efforts along the way. I’m a Principal Consultant, a shareholder and was able to buy my first home before I turned 25. But I still have goals that I want to achieve. I want to be one of the most senior people in Client Server and help other people get the best out of the job and achieve their goals – oh, and stay top biller.  I’ve realised success isn’t about having fancy cars or nice watches, but they’re a nice bonus.