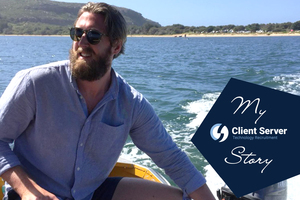 I was born in Germany due to my dad being in the military, and when we returned to the UK we moved around a lot before settling in a market town near Cambridge. My childhood was dominated by sport - football, athletics, rugby – but I was also a bit of nerd and very studious, so I did well at school and eventually ended up at Durham University to study Physics.

I had a fantastic three years at Durham but the same couldn’t be said for my academic performance – who would’ve thought that a Physics degree would be tough? So, with my ‘Desmond’ in hand, I took a one year contract as treasurer of the Durham University Athletic Union, a role which also involved coaching several of the university sports teams and Hartlepool United FC under-16s.

I then set sail for sunnier climes and travelled around the world for a year, stepping foot in Mexico, Central & South America, New Zealand, Australia and South East Asia. Upon my return to the UK, I became a commercial manager for a major construction company. After two years, quite frankly I was bored. I wanted a career that was more fast-paced, more demanding clients, and a genuine career progression path.

After working with recruiters previously and talking to friends in the recruitment industry, I decided that recruitment might be the industry for me. I was attracted to the prospect of a fast-paced sales role, developing business and client and account management. So I applied to a job advert from Client Server. I followed up on my application by calling the job poster the very next day, and after a thorough and unforgettable (for the right reasons!) interview process, I was offered an entry-level role as a recruitment consultant. Accepting the job was a risk, I was on a good wicket and, although the potential to earn an unlimited amount of commission was appealing, there was no guarantee. But I took the plunge and now it’s been nearly ten years since I joined and I haven’t looked back.

Ten years sounds like a long time but trust me, in recruitment it’s not! I can still vividly remember my first six months – exciting, nerve-wracking, eventful, and fun! Some of the main characters I met then are still with the business, which is a major achievement for any company, never mind a company in an industry with a typically high turnover.

During my first five years at Client Server, I was part of the move to our first office in London, started the Open Source/Mobile desk and became a team lead. At this point my then girlfriend (now wife) and I decided that, before life became too serious, we would take an extended trip to Australia and see if we both felt like we could live and work there and not miss home too much, then we should give it a go.

We didn’t really have any high expectations when we went out there but we decided to stay because it’s such a beautiful place to live. It has a really good vibe with loads to see and do, plenty of space and generally good weather. Aussies are all for giving things a go – ‘ask for forgiveness not permission’ is a big motto over here, so we did!

I spoke to our directors, David and Nick about the possibility of opening up a Client Server office in Sydney, and being the trusting people who reward loyalty and hard-work, allowed me to do so.

Now I run Client Server’s Australia operations in Sydney, and it’s been a blast. Don’t get me wrong, starting a business in a country where you have no contacts and no-one knows who you are is not without its challenges. But I have learnt so much – mainly about what not to do! Sydney (and Australia in general) is a beautiful place and there are enough cultural similarities to the UK to make it a realistic new place to do business. We’re now coming to the end of a record sales year - in spite of COVID - and intend to seriously kick-off next year, growing and developing our team.

If you asked me to sum-up my experience of Client Server in one word, I’d say “opportunity” – I’ve had the opportunity to truly influence my earning potential, I’ve been rewarded with incredible holidays as performance bonuses. I’ve been able to live by the beach and now I overlook Sydney harbour. But more importantly, I’ve been trusted. Trusted to provide a high-quality service to important clients, trusted to lead and manage others, and trusted to open and run Client Server’s first overseas office.  I am truly grateful to our directors for their trust and support. If you’re ever considering a career in recruitment, consider Client Server - I did and I definitely made the right decision!​