Q1 wrap: The tech market strikes backPosted over 1 year ago by Nick Boulton 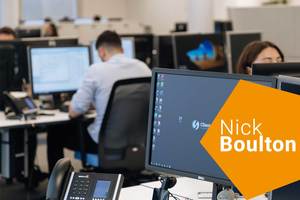 In the blink of an eye, three more months have passed us by in lockdown and it seems like it has flown past despite the bad weather, short days and constant ground-hog day feeling.

One theory is the days seem to have just merged into each other and it’s been hard to even keep track of what week or month it’s been.

At Client Server over the last two months, we have just been so busy, we’ve hardly had time to take a breath, let alone know what day or week it is!

After a painfully slow January, most likely a by-product of our underperformance in December, we have just been non-stop. Jobs, hiring, onboarding, and training - don’t get me wrong it hasn’t all been roses, we have been doing our fair share of firefighting too.

We’ve had staff leave at a time when we needed to be hiring, massively. I think this was inevitable, a combination of lifestyle choices, performance and just not being cut out for sales has meant we have had a large swath of resignations in Q1. It's extremely frustrating, especially seeing the amount of work and opportunity we now have and what we have all been through over the last year. I suppose the fact we are not losing these people to our competitors is some comfort; they are making lifestyle choices by going in-house or on-site.

We have also made some fantastic hires, people who I think will and can genuinely add value quickly, and they join at the perfect time to take full advantage of a booming market.

Let’s face it - recruitment is hard, but it’s pretty black and white, it’s not rocket science. Put in the effort with no excuses and you will have the success you deserve, it’s completely down to the individual. It’s no coincidence that 99% of top billers are the hardest workers who graft the longest hours.

The issue at the moment can be the motivation while sitting at home by yourself – but remember, this is not forever.

As I mentioned, January was slow. Getting sales done was like trying to wring blood out of a stone! But then something changed, despite what the rest of the market was saying and in the face of some pretty miserable financial predictions, technology businesses rallied and realised that they can’t just sit in a state of paralyses for another year.

Hiring, planning, strategy, cash flow and investments were reignited and the fires were lit. In two short months, we have gone from battling every element to having more jobs than we could have wished for, candidates are filled with confidence to move and there is an insatiable appetite for hiring.

Now, this could be a false dawn, but I don’t think so. Businesses have had over a year to adapt to how their future workforces will look and new products, ideas, or solution will stop for no man.

There are now new challenges to solve, new consumer habits to fuel and new solutions that need inventing. While some sectors suffer others will thrive, but this is always the case even in booming markets. Some of the biggest businesses are born out of recessions, adversity or being faced with a supposed impossible challenge.

Q1 has been a complete success and I think could be the start of a successful year.