There is more to the UK tech scene than the hustle and bustle of London. Many of the UK's cities have dedicated tech scenes that hold their own with any of the industry's big centres.

Here are five of the best tech cities outside London.

Home to the 5th oldest university in the world, Cambridge is predominantly known as a centre of academic excellence, global research, and scientific advancement.

Cambridge is neighboured by Lincolnshire, Norfolk, Suffolk and Essex, approximately 50 miles north of the hectic bustle of London. Nicknamed ‘Silicon Fen’, it is one of Europe’s original tech hubs, with a reputation for deeptech engineering, high-tech software and electronics. Its technological ecosystem is dense; there are almost 6,000 tech companies within a 30-mile square radius and 12 – 14 of them are ‘unicorns’ (a privately held start-up valued at over $1 billion).

Despite the concentrated biotech cluster, Cambridge does not feel like it has experienced rapid population growth. The technology employment market in Cambridge has been celebrated as ‘self-sustaining’, as more people are moving to the area that promises employment future beyond any one company, supported by the high degree of networking events hosted by St John’s Innovation Centre, the John Bradfield Centre and Cambridge Science Park.

With its striking architecture, cobbled streets, museums and a library at every corner, Cambridge appears an unlikely technological epicentre from the outside.

Birmingham may be known as the youngest city in Europe, home to the largest library in the UK and has more trees than Paris, but did you know of the 4,000 inventions in the UK each year, 2,800 come from Birmingham?

Birmingham is becoming an increasingly appealing location for tech-focused start-ups. It’s accessible and the low cost of living equates to greater quality of life.

‘Silicon Canal’ is a not-for-profit organisation run by volunteers with the objective of creating a world-class tech ecosystem in Birmingham with its own flavour, distinct from the likes of Silicon Valley or the Silicon Roundabout. The name, ‘Silicon Canal’ is derived from the Birmingham Canal Navigations, which is a network of canals connecting Birmingham, Wolverhampton and the eastern part of the Black Country. The fundamental goal of the Silicon Canal is to ‘connect all individuals in organisations across the ecosystem, to promote the activity of individuals in companies locally, nationally and internationally, and support the entire [tech] ecosystem to grow’.

Birmingham may be overlooked as a tech cluster in the UK, but in reality, it is one of the UK’s major digital hubs, with 6,000 firms employing over 38,000 people. Birmingham has a consistent pool of fresh tech talent from the 18 universities in the area, with the added advantage of less competition from large corporations like Google or Facebook in London. Companies have the pick of Computer Science and Engineering grads, and despite the surplus of tech talent the tech start-up scene is still somewhat under-supplied

So, what’s it like working in Birmingham? Birmingham’s tech scene is characterised by inclusivity. Birmingham boasts a vibrant tech ecosystem that hosts regular tech events, conferences, hackathons, meet-ups and more, covering every corner of the technological spectrum. New businesses are welcomed, in a happy, engaging work environment powered by people. The link to innovation is clear here, a happy workforce means enjoyable work and stronger product development.

The future of Birmingham’s tech scene is bright. An initiative designed to boost the West Midlands economy by £8billion, with the aim of creating 29,000 digital and creative jobs by 2030. Between 2011 and 2016 there was a 130% increase of tech start-ups, and in 2017 Birmingham was frequently named as a location with the highest number of start-ups outside London. HealthTech and FinTech companies are on the rise, and as London-based banks seek new locations for back offices, this will continue to grow. Investment and relocation in the wider region are expected to continue, demonstrating significant advances for tech businesses in the region.

Guildford is the County Town of Surrey approximately 27 miles southwest of London. Guildford occupies a natural gap in the North Downs representing the south-westerly tip of the ‘Greater London Build-up Area’, surrounded by the rolling hills of the Surrey Hills and Thursley Nature Reserve. Guildford is situated on the banks of the River Wey and has an extensive canal network with routes to London and beyond. Although now used for pleasure, the winding estuaries are a well-preserved glimpse into Guildford’s past, a town that has strongly held onto its historic charm.

Guildford is set on the A3 trunk road equidistance between London and Portsmouth and is within easy reach of Gatwick and Heathrow. Guildford has train two stations served by South Western railway, with excellent connections to the South East and onto London. Guildford’s well-appointed location and comprehensive travel network make it a viable out-of-London base for both established and emerging technology companies.

Despite its cobbled streets, stoic heritage and market town feel, Guildford has an all-inclusive, broad spectrum of amenities for all to enjoy. Guildford has two multi-award-winning leisure centres, home to the Guildford Flames (British Elite ice hockey team), its own castle and cathedral, as well as art galleries, theatres, stand-up comedy venues and shopping centres. Guildford is the only town in Surrey (and one of 70 in the UK) to have achieved Purple Flag status, which holds it has surpassed the standards of excellence in a nighttime economy, offering a vibrant, fun and safe night out. So whether you enjoy the gym or swim at the leisure centre, a stroll in the Surrey Hills or trying the specialities of the farmers' markets, Guildford offers something for everyone. 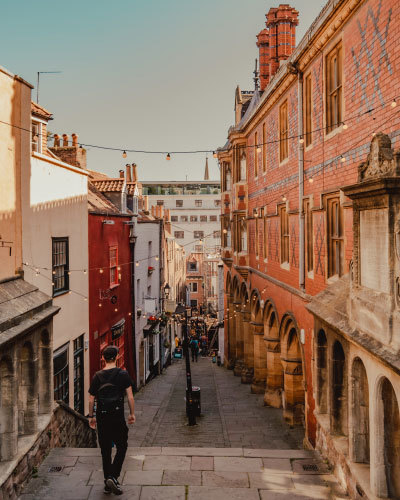 The tech community in Bristol has gained significant traction since 2017 where it received a game-changing flood of investment, raising Bristol’s profile and securing it a place on the UK (and Europe’s) tech map. Bristol is considered one of the most exciting tech hubs in the UK as it has the highest digital turnover per person; which was estimated at approximately £320k in 2019.

What primarily sets Bristol apart from other tech hubs is its particularly well-appointed location. The city is a gateway to the southwest and Wales, it has a rich history of trade and export which makes it an ideal spot for distribution centres. Bristol has a well-connected travel network and offers a strong alternative for the fast-paced (expensive) London life, it has its own distinct identity, networks and technological culture.

Bristol hosts a vibrant, dynamic technology community, supported by a number of specialist organisations dedicated to enriching community engagement and driving collaboration across the region. Organisations like TechSpark, connect, educate and strengthen Bristol’s digital cluster, working with technology businesses of all sizes to help them grow through knowledge sharing and hosting meetups. This has proven to be a valuable reinvestment, Bristol is fast becoming a leading R&D centre for emerging future technologies like indoor mapping, ultra-low emission vehicles and smart city operations.

From budding start-ups to established tech giants like Cray, Amazon and Sony; Bristol’s innovative research facilities, networking opportunities and constant regeneration and reinvestment translate to a thriving tech job market. The 2019 Tech Nation Report articulated that Bristol and neighbouring Bath emerged as two of the best places to live and work if you want to be employed in the technology sector, and with a collective digital turnover of £8.1 billion you can understand why

From manning the helpdesk, writing code as a programmer or driving transformational chance as a business analyst, there is something for everyone looking for a technology role in Bristol.

Leeds is the largest city in the county of West Yorkshire in Northern England. Leeds has built a strong reputation on its notably diverse economy and is a leading employment centre, as it’s seen the fastest rate of private-sector jobs of any UK city. More recently, Leeds has asserted itself on the Tech Hub stage across the UK, and its strength and diversity means it has the potential to compete on an international scale in years to come.

Historically, Leeds is not a city you might associate with technology. However, Leeds is by far the fastest growing tech hub in the north that has won a reputation for innovative tech start-ups and enterprises. Leeds digital sector currently contributes approximately £6.5 bn to the City Region economy with further records for investment. The technology sector in Leeds employs over 102,000 people which reflects strong job security and career prospects, as well as the rate of start-ups and scale-ups driving the demand for a consistent flow of skilled workers.

The tech sector in Leeds has remained solid throughout Brexit, and continues to attract industry innovators and professionals predominantly from MedTech, FinTech and Cyber Security, due to the high levels of tech growth potential in the region. Research by TNT in 2018 put Leeds in the top three of emerging tech hubs in the UK, with contributing factors including business start-up survival rate, internet availability and affordability.

Whilst Leeds technological success is demonstrated in its rapid growth and remarkable results, but Leeds differentiates from other tech hubs in the UK because there is an abundance of dedicated resources designed to support this development and make it an even more attractive area to set up a tech business. For example, #Welcome has been launched; a soft-landing package to de-risk investment for fast-growing tech and creative companies to locate in Leeds. Leeds.Tech is another resource available, an independent platform that holds data open for all to use, helping new and established businesses in Leeds to make informed decisions when looking to locate or do business with compatible organisations in Leeds.

For 2 weeks every year Leeds transforms to host the ‘Leeds Digital Festival’, which attracts 25,000 visitors and 220 events designed to highlight the city and wider region’s strengths as a digital hub, feeding the longer-term aim of generating more investment and attracting more business. Leeds Digital Festival prides itself on diversity of events and speakers it attracts; from ‘code in the dark’ competition to day long women in tech workshop aimed at supporting young women and school students.

Ultimately, Leeds is ahead of the game when it comes to tech opportunities. From its diversity to injecting millions into the regional economy and network of support and its affordability, Leeds is one of the best places to start a business in the UK.

Find Your Next Job