Women in Tech: Caplin's Amanda Gamage on Finding Passion in TechnologyPosted 10 months ago by Client Server 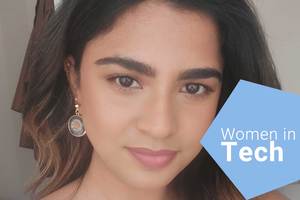 Amanda Gamage explains her journey with technology, and where the future holds with her at Caplin.

What sparked your interest in technology?

It happened when I was very young, when I was in primary school. I was born in Sri Lanka and we didn’t have IT lessons in school until much later. My dad found this IT club that offered private lessons and I went along and found that I really enjoyed it. It was a good way to be introduced to technology because didn’t have a computer growing up – the first time I used one was at this IT club.

Was your dad into tech himself?

Both of my parents are nurses, so they’re not good with technology at all. But he had a feeling this was a good thing for me to do.

What was it like when you moved to the UK?

When I came here, I became a completely different person. I was more quiet and shy than I was back home. In Sri Lanka, I was doing dance and drama as well as learning IT as an extracurricular, but when I came here, I didn’t want to do that. I didn’t want to be in front of people and have that kind of attention on me.  So, given the choice, it was easy to focus more on the tech side of things since I knew I liked it. I took it for GCSE and A-Levels, before doing a degree in computer science in business computing.

What was the ratio of males to females in those classes?

I recently talked about this with my manager here, and they were shocked. We had maybe 15 or 20 girls at university and almost 200 boys. It was the same at GCSE and A-Levels too. People dropped out or changed courses halfway through as well, I had a feeling something was going on.

What did you make of it?

I knew many weren’t feeling confident about the course and what came after, and I had that worry too. I was worried about not being able to get a job because of how competitive it was. I had a serious fear that after graduating, I wasn’t going to get a job. So, I applied to do a placement year, thinking “If I get this placement, I’m going to work hard and make them like me, and then they will call me back for a job.” And that’s what I did, and they offered me a full-time job after I graduated. That’s when I could finally breathe.

How did you join the team at Caplin?

I’m actually kind of new here – I only started in December 2020. I’m still finding my feet as this job is somewhat different from what I was doing before. I work with two other people as a Technical Support Consultant; My job involves carrying out the initial investigations which entails looking through logs and comparing configurations. I like the pace here at Caplin.

How would you describe your experience of being a woman in the tech industry?

In my previous jobs, I felt like I wasn’t being taken seriously. There were times where I would respond to queries from my colleagues only for them to wait for a male colleague to confirm it and give the exact same advice. It always made me wonder “Why does it have to be like that?” Caplin is very different – I feel that my opinion is valued here. There are many women working here and I love listening to every one of them. I’m learning so much from them too.

Where do you see your career in five years’ time?

It’s tough because I’ve only just started and who knows what could happen? But I definitely see myself in some kind of support role because I like helping people. Being a team lead would be something to work towards.