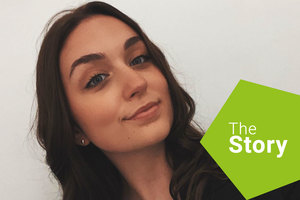 Amber Taylor was part of Client Server's graduate trainee schemes in June 2021. She dives deep into how she wants to develop her skills in the next years.

What were you doing before Client Server?

I was in my first year of university, studying psychology. It was not for me, and was itching to work. I was also in retail, and recruitment made sense with my enjoyment of talking with people, and having something to aim towards.

What about Client Server appealed to you?

When you first start looking for a job, you put your foot in any way you can. As soon as the interview process began at Client Server, I immediately connected with those who interviewed me.

I had a final stage elsewhere and with Client Server. What stood out about Client Server compared to the other company is that they let me come into the office, and get the atmosphere and a real feel for the place.

Now that you have been here for a bit, how have you found things?

Everyone always says to me, “recruitment is a roller coaster.” I sort of laughed, but they are not wrong. It has its ups and downs all the time. But the people that you work with has a huge impact. We get mentors at Client Server, and my mentor is Robbie.  By having a mentor to pick you up before you completely fall, especially if you’ve never been in recruitment before helps so much.

As Client Server is my first full-time job, I have so much support from my team members and the company as a whole.

What is it like talking about tech such as C++?

I really like it. To hear someone be passionate about what they enjoy, I love that. And it's very cool what they can do with two different languages or the extent of different sectors such as sports, finance, etc. And you can tell the difference between people that sort of do tech, and people that really love it.

You recently been promoted, how has that?

When I got pulled in for the promotion, I couldn’t believe it, I've been here like nearly five months. But thinking about the way we were trained and how the career progression was clear, it makes sense why some of us had been promoted quickly.

Robbie had asked before the promotion, if it is what I want. And of course I wanted it, I'm not here to stay a trainee. In the meeting they said, “We want you to know that what you’re doing and your work is recognised.”

What's your ambitions for your time here at Client Server?

Keep going up the ranks promotion wise. I really like talking to people every day, and helping as many people as possible get in their new roles. Long term goals, I want to start mentoring, I would like to help not only tech people find roles, but help colleagues succeed here at Client Server.