No time for TWATs: Why EQ is the currency businesses should invest inPosted 9 months ago by Nick Boulton 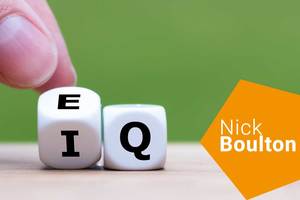 On a recent episode of Talking Tech, I was joined by CW Jobs’ Commercial Director Dominic Harvey. We talked about the state of the technology hiring market and what changes we expect in the next year.

One thing we agreed on was how important emotional intelligence (EQ) had become in the world of work, more than actual skillsets in some cases. I mentioned that the biggest change seen in the last 18 months was that people with 6/10 skillsets, who’d been previously rejected out of hand, were now getting job offers everywhere.

For years I have held EQ in far higher esteem than actual experience or skillset. It’s been what I look for in everyone I interview. But in today’s world with an increasingly needy workforce, EQ will only get more important.

We have all become used to having an element of flexibility in our work lives. WFH, as I have said many times before, will be here forever in one form or another. But the needs of businesses is there too. So, how will these two forces meet their equilibrium?

Well, it will be led and managed by people with the greatest EQ. People who, yes, enjoy the newfound flexibility their jobs provide but are still ambitious, hungry and eager to be the best performer in their organisation.

There is now more than ever a reliance on self-management, trustworthiness and maturity to work autonomously. I don’t think businesses need to worry about this, they should embrace it and reward those who lead by example and still strive for excellence.

But is there reason for concern?

I was crudely introduced to the acronym for the new working week (apologies in advance).

I was asked if I was a TWAT . That stands for Tuesday, Wednesday and Thursday. This is what most people are now seeing as their normal office working days. (Maybe that’s just what they told me but actually they just calling me one?!)

Business owners up and down the country are envisaging hordes of staff using their Mondays and Fridays as extended weekends, piss ups and soon, balmy golf afternoons as spring arrives. But I firmly believe if you hire the right people with the right levels of EQ this is a million miles away from reality.

You will always have skivers, piss takers and slackers, but in my experience those people are the same ones that do it in the office.

What do you do? Simple, manage them out of the business. I think it was Reed Hastings, founder of Netflix who said, “We give adequate performers a generous severance package”.

This will be a change we will see over the coming years, a less tolerant approach to people who abuse the flexibility or trust they have been given by companies in this new era of working environment. We have become too caught up in making sure we don’t do anything wrong when it comes to manging people out of a business, a typical nanny state approach of “Has every box been ticked? Has HR been informed? Have they been given the chance to have performance management targets? Managed up, managed down? A final letter of warning issued to their goldfish?

FFS, let’s just be honest about it, no one wants these people in their business. As far as I’m concerned, in a world where people are cross training, upskilling and desperate for an opportunity, why wouldn’t you take someone with a greater EQ than some of the over-qualified, over-indulged, primadonnas who expect everyone to jump through hoops for them?

I welcome the dawn of the more emotionally intelligent candidate, I’ll hire them in their droves if I can! It opens the door to more women coming back into the work force, more mums who have put their careers on hold to have children and now want to get back into the workplace. It’s no secret that women are generally more emotionally intelligent than men, in many cases just more intelligent too, but I think there is a great opportunity for business to hire some of the most EQ people out there.

If you set clear expectations, boundaries and targets, they have nothing to complain about. I don’t expect everyone to hit target all the time, but I don’t think there is any excuse for laziness, tardiness or people being dishonest. Those who live a life led by EQ will grow while the rest will get caught out.