The Story: Ably Chief Scientist Paddy Byers on plans to reach 1 billion devices by 2025Posted 4 months ago by Client Server 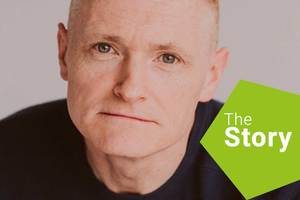 “I've always been someone who likes to make things,” says Paddy Byers.

“It was quite natural in the end that I would go into technology. It was the best way for me to use mathematics in the real world.”

For more than 30 years, Paddy has combined these two things to deliver innovative software solutions. A widely respected technologist and innovator, he brought his wealth of talent and experience in co-founding Ably along with CEO Matthew O'Riordan in 2013. Byers remains hands on as the company’s Chief Scientist, overseeing Ably’s technical development and growth.

Ably is a platform that powers synchronised digital experiences in realtime for 250 million devices per month. Whether attending an event in a virtual venue, receiving realtime financial information, or monitoring live car performance data - Ably can help power live and collaborative experiences at scale. The London-based company, buoyed by a $70M US Series B funding round in 2021, has plans to reach more than a billion devices by the end of 2025.

“There’s still significant work to do, but we’re on a trajectory to get there,” Byers says.

Among an impressive suite of customers, big-name brands like HubSpot, Toyota, Verizon, Bloomberg and Hopin are all using Ably's realtime technology.

Ably’s platform, hosted on AWS, was originally written in Node.js. Its original orchestration system started out in Ruby because Kubernetes didn’t exist when the company set out. But as the stack evolved, Ably has moved more towards migrating both its realtime infrastructure and its orchestration side to Go. Byers says this is to improve both performance and developer productivity.

Who Ably Want to Hire

“We’ve always hired people based on what problems interest them,” he says.

Almost every member of Ably’s realtime team is a mathematician by training with what Byers describes as a “mentality that you need to reason with software problems.” Typically, he finds that devs interested in those problems have Go experience under their belt.

“That's either because they're writing hobby projects in Go, or they're working professionally in Go. So, it's really quite rare for us to get someone now who is not primarily a Go developer.”

Hiring hasn’t always been easy, Paddy admits. “The bar is still very high, so not very many make it through.”

“We're looking for quite niche subject expertise. And we're looking at the very top in terms of ability.”

One of the most gratifying aspects of Ably, Byers says, is that Ably created a product predominantly used by software developers.

“Our engineers can empathise directly with our customers and very often will interact directly with them so they can understand what they want and how best to support them.”

That strong focus on software for software developers has fostered what Byers calls “a very, very high allegiance to the product”.

“People love working at this company, truthfully. Although we’re expanding, we have a tightly-knit team where a good number of people have been with us for a long time.”

Byers describes Ably’s culture as both informal and challenging. “It’s relaxed, it’s very open, and it’s honest. But with that honesty comes accountability, and everyone – including me – is held to account.”

Ultimately, Paddy says, Ably’s future depends on building an arena where ideas can be given space to grow and develop.