The Story: Cassini's Chris Curtis on juggling the demands of an ever-changing tech stackPosted 12 months ago by Client Server 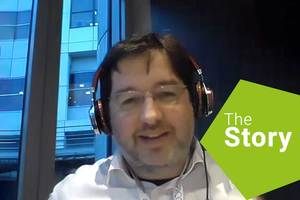 Chris Curtis is a lead developer at Cassini Systems, the margins analytics platform. He talks to Client Server about the company's journey and why he likes juggling many different roles.

Where did your tech journey begin?

It depends on how you count it. I'd been working in finance for about 10 years now, previously in a big bank environment. In terms of tech, I came to the party quite late. I think the first time I used a computer was when Windows 95 came out, which giving nothing away about my age is quite late. Back at school I was convinced I was going to be a geologist.

It's not too dissimilar from a lot of people's journeys in that I fell into it, but not a lot of people wake up and say "I think I'm going to work for a margin analytics company!" I left university with a physics background which was geared towards computational physics, so the move into tech was a natural progression in its own way.

And what are you doing now?

How different is it working at Cassini compared to where you were before?

I went from working somewhere with whole departments geared towards sorting out particular problems and being responsible for such a tiny, tiny part of the system to here at Cassini where everything - every environment, every team - is on you. There's a lot of creative freedom in that and a lot of responsibility as well.

My role is primarily geared towards the design and implementation of the analytics engine and the backing servers for that. All of our APIs which Cassini's clients use are deployed via Docker containers. They're primarily written in Python with various database technologies behind it. The backing services for market data or reference data is all cloud-based, so we're using a lot of AWS technologies too.

What about working at Cassini excites you?

Definitely the variation in the day-to-day tasks. Some days we get to focus on new client requirements and then other days you get the space to sit down and really think about the architecture. If there's a need for a piece of technology or functionality that does not exist, it's very easy to get it going here so long as you make a case for it, that's a really exciting environment to work in. Other people joke that I bounce into work even two years on!

What projects are you working on right now?

Something that's come to fruition quite recently is our market data platform. As Cassini continues to grow, we decided to re-build the platform on AWS and that has given us so much more scope to scale with our clients and deliver more data more selectively and faster. It's been a real boon to the platform. Typically, we'll get requests for functionality from our clients, but I like to ask our team to think ahead and ask "What are the requirements the client is not asking for but they will probably need?"

What would you say to someone who was thinking about joining your team at Cassini?

If you've got the skill set, we want to hear from you. I've been here two years and the headcount has doubled across all business areas. It's an exciting time for us where in 24 months we should have doubled our offering.

Outside of work, what do you like to do?

I practice tai chi and I like to juggle too. There was a teacher at school who juggled at assembly and I thought "Wow, that's fun". So I sat down one weekend, literally one weekend, and taught myself and by the end of it I could do six catches.