The Story: From sketching in class to product design at IGPosted 11 months ago by Michael Oliver 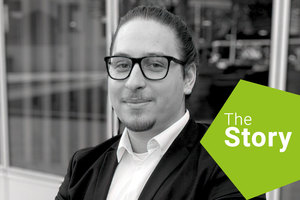 Niko Xydakis is a producer designer with IG, a role he was placed into through Client Server. He talks about how his creative side met his techie side to forge a career in UX/UI.

From a very young age, Niko Xydakis was a techie kid. The product designer was intrigued by the way computers and mathematics worked together.

“I had some math tutors who were studying computer science, so I was always asking them questions about tech and wanting to be a part of it,” he says.

Naturally, it led Niko to pick up computer science at the University of Essex… but something kept nagging at him.

Amid a flurry of classes involving “very hardcore computing,” Niko found his interest starting to wane. Looking back, he thinks there was a gap between what was being taught in the lecture hall and what was happening in the office.

“They’re very traditional in the way they teach computer science,” he says. “They skip out lots of things graduates need in order to find a job.”

So, to offset the pressure of study, Niko took to sketching. He would draw pictures to give his brain something different to focus on, but he began to see that drawing might be more than a pastime.

After graduating, he admits finding post-uni life “a little bit fuzzy”. His head was filled with theory and ideas about how design should or shouldn’t work, but he found it hard to link the world of work to his study.

Niko’s interest in sketching transformed into a fascination with graphic design.

“But then my background in computer science kicked in, especially when designing applications,” he says. “I found myself designing things but thinking about the logic behind them in way a developer would.”

From there, a career in UX/UI began to flourish and he found a way to link the creative and techie sides of his personality.

“Product design is a form of storytelling,” Niko says. “You take the user from A to B and beyond. Details will make the difference.”

UX/UI is a form of service. It needs to be useful. The way Niko sees it, a person could create the “most perfect product ever” but if a user runs into trouble and can’t find help, they’ll immediately look for something else.

“If people feel comfortable in asking for support, and they feel their questions have been answered, they’re more than likely to stay and use the product even more.”

And that knack of using tech to tell a story saw him land a role at online trading company IG as a product designer, a role he was placed in through Client Server.

“The thing that stood out quite early on was how detailed and informed Lucy was,” Niko says. “That really reassures the candidate, knowing they are speaking to someone who knows what they’re doing.”

“She wasn’t just calling to say ‘We’ve got a role, are you interested?’ She would take time to find out more about my motivations and what I wanted from a new job.”

Niko says the level of care and dedication shown by Client Server didn’t just stop with pitching a job, it helped him get in the right headspace for his interviews.

“Lucy would call before every interview to check that I was ready and to make sure I had everything I needed. That went a long way because I’m a very nervous person and I get stressed so easily. But that phone call just made me feel prepared. It was perfect.”

And what does the future hold? Niko says the last two years have taught him not to make too many predictions, but that he knows what direction he wants to move towards.

“I want to help companies create really, really meaningful designs,” he says. “Designs that make sense, designs that get recognition, and really, really pave the way for the world to move forward. And if I can do that, then that would be very, very cool.”