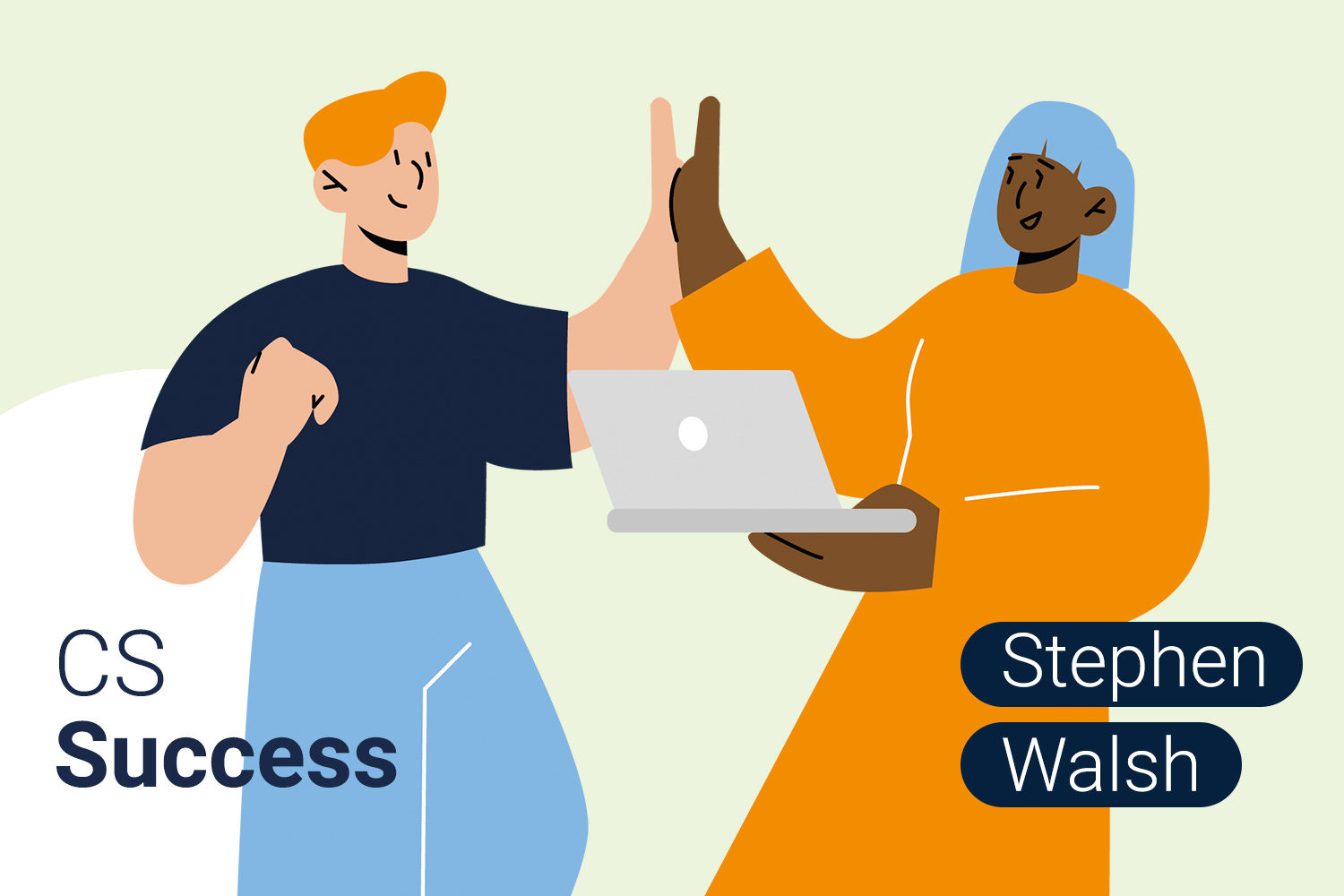 Stephen Walsh has been in the recruitment game for 12 years and is one of our experienced consultants hiring for the European market. He has worked across different industries but says that "tech is definitely the most interesting".

What were you doing before Client Server?

I used to be a part of an indie band alongside studying music. We were signed and played with some pretty well-known bands but when that ended, I found myself in the job centre in Edgeware thinking ‘what am I going to do with my life?’

I got an admin job that was actually a recruitment job disguised as an admin job and now 12 years later here I am.

What was your reason to jump into tech recruitment?

Outside of the allure of recruitment, was getting to work with some of the companies that have products I use as a consumer and getting an insight into how they operate. It interested me to work on the other side where you’re finding the people that are building the products you’re using yourself.

A part of it was making a change in industry, an industry that I have a personal interest in. I grew up using the internet as a way to meet lots of people. Since I was 10 or 11 years old, I've been an online gamer, so tech is something I've always used in my day to day. It's a massive hobby and how I didn't end up in tech sooner is a bit of a strange one to me. Some people might not like to blend their hobbies and work, but I think this one's a pretty good mix.

On the technical side, people are definitely more interested in talking about what they do. You’ll find that some even enjoy being technical tested because they like to show off their knowledge and the projects they have worked on. You have to dig a lot deeper into what they are doing, and what they actually want, so it's really interesting.

How have you found things at Client Server so far?

I have found it really good, especially because the progression is real. At Client Server, there’s a real timeline of progression. I’ll set realistic goals for achieving certain targets within a timeframe. You’re not always going to get it the first time and in the moments where I haven’t hit what I’ve needed to hit, it was re-engineered to make it possible again over the next 3 or 6 months. Ultimately everything I was told has been delivered on, as long as I have delivered on my end.

How did you find the onboarding process?

Considering I had 10 years’ recruitment experience you'd think I'd be happy to just pick up the phone. But when you're changing into a new industry and you don't have the exact knowledge about what candidates do, it can be quite jarring. During the whole entry period you're given time to acclimatise and with the training and knowledge from the different Team Leads you pick things up quickly. Rather than just one person giving you a week's worth of training, you've got four or five people's different recipes for how they do it. And then you are given the tools to build your own as you go along.

What do you like about hiring for the European market?

Previously I worked in the European markets, and I always quite enjoyed that. You get to speak to people from all different cultures and it’s definitely the most diverse team in terms of roles, the types of companies that we work with, and candidates, which is a big pull for me.

What's great about your team?

The thing with Team Europe is, like every team at Client Server, there is comradery going on. Everyone’s got each other’s back and because of Client Server’s split desk business model, the team does actually feel like a team. Ultimately in recruitment, everyone has individual targets and what I’ve found in some of the larger businesses I’ve worked in previously people tend to be secluded. Here you are all working the same sort of roles from a delivery perspective, so you aren’t trying to steal each other’s clients, it’s purely everyone and candidates.

What sort of success have you seen?

Even coming in with experience, there were a lot more things to learn about the account management side. I took on account management responsibilities after 5 months, it went well and now I’m running 3 accounts for well-known companies. One of them is a house client we’ve worked with for around 20 years and I’m grateful I’ve been afforded that responsibility within 18 months of being at Client Server.

What are your long-term goals at Client Server?

Going forward I have goals to manage bigger and more accounts and continue working with clients and candidates on cool projects across Europe.

I wasn’t always up for the management route, and I still don’t think I’m particularly interested in it, but mentoring is something that I’ve picked up, which I never had in my other roles. I like being able to offer help and advice to junior consultants or trainees coming into the industry for the first time, which is something that I want to continue with.

Do you have any advice for anyone who is thinking about jumping into tech recruitment?

I’ve always felt looking from the outside in, recruitment doesn’t look that glamorous and make no mistake it can be quite challenging, but it is also really rewarding. Not just monetary, but feeling like you’ve achieved something, say you’ve got someone through a six-stage process and relocated them to their dream job in another country gives you a real sense of fulfilment.

Having worked in different industries, tech is definitely the most interesting. The advice I would give is if you are a tech-savvy person that enjoys the world of tech, you're going to like this so go for it.

We've told you a little about us—we'd love to get to know you.

Whether you're new to recruitment or you've been in the game for years, we are keen to learn more about what drives you and why you think we'd be a great match.

Find out more about what it's like to work for Client Server - check out our careers page.