The Story: Meet Foundry, the company behind every VFX Oscar-winning filmPosted about 3 years ago by Michael Oliver 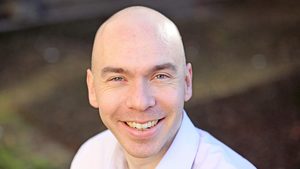 Phil Parsonage is the Chief Engineering Officer at Foundry, who have been developing creative software for the digital design, media and entertainment industries for more than 20 years. Their clients include major feature film studios and post-production houses such as Pixar, ILM, MPC, Walt Disney Animation, Weta Digital, DNEG, and Framestore.

Phil tells Client Server Marketing Manager Michael Oliver about what Foundry looks for when hiring engineers and how a little bit of C++ can make a huge difference on the big screen.

Michael Oliver: You’ve been with Foundry for more than 15 years – can you tell me about your current role?

Phil Parsonage: I'm chief engineering officer and have been in a variety of jobs, through starting off as a C++ developer, then running different departments and through to my current role where I look after product engineering across the media and entertainment part of the business, plus some of our internal technology teams.

MO: What does Foundry do?

PP: Foundry is a creative software developer for anything that involves pixels and beautiful pictures and products. Our company’s brand platform is “Imagination engineered” which is all about advancing the art of technology and enabling more and better creativity, faster. And our mission is to help customers meet the demands of their markets by helping them bring incredible ideas to life, faster and better. We work across two main industries - media and entertainment - where we do a lot of work in both post-production and pre-production in visual effects, animation, gaming etc. And the second one is in digital design, where we help our customers visualise photo-realistic designs efficiently using digital tools.

MO: Foundry software is a mainstay of the film industry, isn’t it?

PP:  At a basic level, one of our products - Nuke - manipulates pixels to form the images used in the films and tv shows that we all know and love. It’s used pretty widely!

MO: Do you ever get to see what your work looks like on the big screen?

PP: No, funnily enough. If we can tell that our tools have been used in a film, we've probably not made the tool as well as we’d like to. I love going to see our customers, that's probably the highlight for me. We're really lucky - they’re some of the biggest VFX houses in the world and seeing what they're doing, and hearing about what they're working on, and being able to work with those guys is a privilege. Being able to tell your daughter that you went to see the people that make Star Wars is a nice feeling.

MO: What do you look for in an engineer?

PP: The bulk of what we still do is desktop software - C++, Qt, OpenGL for rendering. That has started to change slightly over the last few years. We have a couple of products now that are cloud-based and the skillset that we use has now gone towards more Angular, Golang, more cloud based tech stack coming in. The two products using these technologies are Athera - allowing users to do VFX projects and collaborate in the cloud and Flix which is a desktop application, but leverages technologies like Electron, and Angular. So the skillset has started to become slightly more diverse as the company has grown, but still the mainstay of what we do is the C++, Open GL, multithreading skills base.

MO: Is there anything you place emphasis on for engineers?

PP: What we place quite a large emphasis on is getting the personality right. A lot of what we do can be quite complex, or can sometimes have challenges that we don't necessarily anticipate. So, we really look for people that are open to attacking problems that are hard, and they don't know the answer, or maybe they've not tackled something like that before. There's normally an attitude and an openness to trying new things, to being able to say, "Well, I don't know how to do that, but I'll go and find out."

MO: You're predominantly C++, as you said, how do you see that language evolving over the next little while?

PP: I think it's changed hugely in the last few years. C++ 11, 14, 17, are starting to standardise the language where before you had to go out to a boost, or write something yourself, or adopt a library. So the language has begun to evolve more quickly, for example concurrency models have started to change by taking advantage of where multi-processing is going. It's going to be really interesting to see how some of the GPU and many core technologies play out, both from a hardware perspective but how they are addressed through programming languages.

"A lot of what we do can be quite complex, or can sometimes have challenges that we don't necessarily anticipate. So, we really look for people that are open to attacking problems that are hard, and they don't know the answer, or maybe they've not tackled something like that before."

MO: How will that affect things at Foundry?

PP: As a company that looks to push the boundaries of what’s possible, the new hardware and the opportunities to work with them is pretty exciting. Though with the caveat that artists control that technology to be able to get the result that they need. There’s a wonderful mix of technology and creative process in what we do, so it’s important to balance things out.

MO: How have you found working with Client Server?

PP: It's been really good over a long period of time. I think the relationship has probably changed quite a lot that time as we've both changed and grown, but it's always felt like a partnership along the way. We’ve worked through multiple models with CS down the years, and at the moment have an in house team working alongside them, and that partnership has continued throughout. The greatest compliment I can pay Client Server is every so often they call us up and say, "Look, we know you don't have a current job open for this type of person, but we've met them, and we think they're a great fit for you as a business." And an awful lot of the time, that's been proved correct. It feels like Client Server have always taken the time to get to know us, to get to know us as a company, what we look for and that slightly unsaid culture that exists in all companies, I think, has been very well understood by Client Server down the years.

MO: What does the future hold for Foundry?

PP: There are lots of exciting technological advancements for us to take advantage of, but I think the main thing for us to continue doing is to listen to the artists that use our software. There's an awful lot more that we can still do, and there's lots of technologies coming online like the real time ray tracing, and even being able to process in the cloud. However, having a technology is one thing, but having a technology that complements workflows is another thing. So we're going to continue listening, innovating, questioning and collaborating to make tools that artists love.

Check out other editions of The Story: