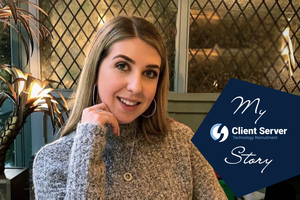 When I left college, I was constantly asking myself whether I should go to university or work.

I thought university would be a waste of time because I didn’t know what I wanted to study. Then again, I had been put off working in an office by my work experience in secondary school. I worked in a council tax office and removed staples from paper for two weeks – it was the worst two weeks of my life.

My mum would always say that there are so many jobs out there that I didn’t know existed. So I decided to explore. I was working at a toy shop whilst at college, before working at a butchers on their deli counter, which is comical as I’m a vegetarian. I then swapped the meat for makeup and worked at a Benefit make-up counter.

You can only imagine that after all of that, I knew retail wasn’t for me. I needed a change and I wanted to find a career that I could grow in. I spoke to my friends and family and I thought administration would be a good route to go down, so I applied for a few roles and one was with Client Server.

I didn’t have office experience at the time, but I knew they were hiring for two positions. After my interview, I wasn’t sure if I would get the job, but the recruitment field and the technology industry really interested me. A few weeks later I got the call – I got the job!

I worked on the admin team for a year and then Lucy , Nick’s EA at the time, was leaving to go on maternity, so he offered me her position. I remember it like it was yesterday:  I had come up to London to help with the Grad Scheme and was in a meeting with them both. He took her out of the room and when they came back in, he offered me the job!

I was really happy but nervous at the same time. I knew how much responsibility I would be taking on as the role requires my time in and outside of working hours. But taking the role was the best decision I’ve ever made.

I just celebrated my five year anniversary and it’s mad to think how fast the time has gone, which must mean I really enjoy my job. I get to organise our Christmas and summer parties, client days out to Ascot, office moves – the list goes on. I’ve moved from the Esher office to London office, which was a big change, and then we had an office upgrade as our headcount increased. There’s been quite a lot of changes for me and the company. I get on like a house on fire with Nick, which is all you can ask for when you’re someone’s EA. I guess that’s why I’ve stayed for so long.

I’m really proud of myself for building my career, I knew that the sales side of recruitment wasn’t for me, so being Nick’s EA is my perfect job. I’ve now had way more exposure to the jobs out there, and know there is so much more than I ever thought and I can’t wait to see how this progresses.