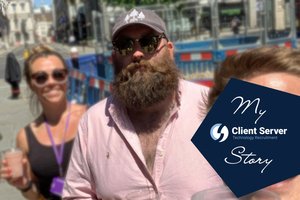 If you’ve spoken to me before, and have an ear for accents, you may have noticed that I’m an Ulsterman (Northern Irish for those not up to date with the provincial lingo). A fairly clichéd Ulsterman at that. This includes the classic tropes of growing up on a farm, drinking too much Guinness and complaining about the price of everything. Northern Ireland will always be home, but by the time is 15 I knew two things for certain: Ulster Rugby are the greatest team to ever play the sport and there must be more to the world than the farm.

So after I finished school, I packed two rugby bags and left home to start university in Canterbury. Within two weeks I got a job at the local pub and became the cheapest psychiatrist on offer…depending on what drink you ordered. I was a man of the people – Robbie the Barr-tender (a joke that became tedious after the first time, let alone the hundredth).

I thrived on the combination of uni and pub life, so when the landlord asked me if I wanted to take on more responsibility and run the pub, I leapt at the chance. I was living The Life of Riley . I was essentially being paid to socialise, live above the pub and have a good time, but I was working longer and longer hours and most definitely burning the candle at both ends. Being a bartender has its shelf life (or at least the way I was doing it) so I needed a plan. It just so happened that the pub was up for sale, making me jobless and both literally and spiritually homeless.

It was now time to ‘grow up’. I had worked in hospitality since I was 13 – you name it, I’ve done it. I never knew what it was like to have a weekend, have a life outside of work. I’ve always wanted to ‘Bourdain’ my way around the world but that position was taken.

Two of my closest friends worked at Client Server and had said good things about it. So I messaged them to see if they could give my CV to a hiring manager. Bear in mind, my CV had "hospitality worker" written all over it. So when Owen White (Head of Internal Recruitment), received it, he rang me up and said "Thanks for the CV, Robbie but we’re looking for recruitment consultants, not a pub landlord," definitely a fair critique and he gave me advice on how to fix it. I changed my CV to suit the management and hiring side of my roles and sent it straight back to him and luckily I managed to secure a telephone interview. Coincidently, I was going to be in London that day, so I asked if I should drop into the office instead.

I met the team and ended up staying for the whole day. I had landed myself a new job. Owen took me out for a celebratory drink where I confessed my master plan. I had come to London specifically for the interview. But I knew that if I could get into the same room as him, I would definitely get the job (ballsy, but it worked). He congratulated me on succeeding, but in the same breath, he told me never to lie to him again. I can confirm, I have never lied to him again – a great way to start a new job.

The first six months that followed were tough. I’ve always taken pride in knowing my job inside out and in this job I knew nothing . It really dawned on me how junior I was, learning everything from scratch. After countless training and sessions with DK, I can now hold full-blown conversations with developers about tech. I don’t think you can get that at another recruitment company.

Client Server has a great structure and they give you the tools to be your own boss. I like to accumulate knowledge and be able to pass it on to other people and build them up. I like to see myself as someone that junior consultants could come to if they ever need advice, which is a really nice feeling. I enjoy helping people become better at their jobs and would love to become a Team Lead because I’ve found a fondness in talent management, whether that be with recruiters or developers, and would love the opportunity to do that on a daily basis.

I’ve always been pretty upfront in my appraisals; I don’t see myself going to another agency, perhaps a bit of New York syndrome (If I can make it here, I can make it anywhere). Recruitment is rewarding but it can also be stressful, so the very least you can do is work in a company where you enjoy the people and that is something that Client Server does very well – hire quality people.

During lockdown, I shared my story on how not to be afraid of asking for a day off and the reception I received was astonishing. I’m very lucky to have a good support network of friends and work colleagues. I will always admire Client Server actively trying to bring more awareness to mental health and improving our wellbeing policy as a result of me sharing my story. We work better when people’s mental health is healthy so I’m hugely honoured to be a mental health ambassador internally.

When I left Northern Ireland seven years ago, I never thought that I would’ve ended up as a recruitment consultant for the top consultancy in London, but so far so good. I’m proud that I’ve found my independence, my career and learnt the biggest lesson of all – it’s ok not to be ok.